Update Required To play the media you will need to either update your browser to a recent version or update your Flash plugin.
By Hai Do
07 January 2022


Sidney Poitier, the first Black actor to win an Oscar for a best acting performance, has died. He was 94.

Poitier won the best actor Oscar in 1964 for Lilies of the Field. His performance changed how Blacks were presented in the movies. It also inspired a generation of actors during the civil rights movement in the 1960s.

Before Poitier, most Black actors were only given supporting parts in the movies. Hollywood filmmakers rarely attempted to tell a Black person's story. 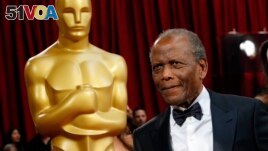 In 1967, Poitier was the leading actor in three Hollywood movies in the United States.

In Guess Who's Coming to Dinner he played a Black doctor who wishes to marry a young white woman. In In the Heat of the Night he was Virgil Tibbs, a Black police officer dealing with racism during a murder investigation. He also played a teacher in a London school that year in To Sir, With Love.

Messages honoring and mourning Poitier flooded social media after the announcement of his death from the Ministry of Foreign Affairs in the Bahamas.

Whoopi Goldberg wrote on Twitter: "He showed us how to reach for the stars." Tyler Perry added on Instagram: "The grace and class that this man has shown throughout his entire life, the example he set for me, not only as a Black man but as a human being will never be forgotten." And musician Lenny Kravitz wrote that Poitier "showed the world that with vision and grace, all is possible."

Poitier's rise as an actor was similar to changes in the U.S. in the 1950s and 1960s. He played the escaped Black prisoner who befriends a racist white prisoner in The Defiant Ones. He was the office worker who falls in love with a white girl who could not see in A Patch of Blue. He was a worker in Lilies of the Field who builds a religious center for nuns. And he was the young father whose dreams clashed with those of other family members in Lorraine Hansberry's A Raisin in the Sun.

Debates about racial issues in Hollywood often turn to the story of Poitier. For years, he was not just the most popular Black movie star, but the only one.

"I made films when the only other Black on the lot was the shoeshine boy," he told Newsweek in 1988. "I was kind of the lone guy in town."

In 2009, President Barack Obama awarded him the Presidential Medal of Freedom. Obama said that the actor "not only entertained but enlightened...revealing the power of the silver screen to bring us closer together."

Poitier's part in Hollywood is often compared to Jackie Robinson who broke the color barrier in Major League Baseball. He was also compared to Martin Luther King Jr. who led the civil rights movement. But Poitier also faced discrimination from whites and accusations of compromise from the Black community.

In 1967, Black playwright Clifford Mason wrote in The New York Times, "Why Does White America Love Sidney Poitier So?" Mason called the actor a pawn for the "white man's sense of what's wrong with the world."

Poitier had a hard time finding housing in Los Angeles, California. And he was followed by the Ku Klux Klan, a white supremacist group, when he visited Mississippi in 1964, not long after three civil rights workers had been murdered there.

Poitier was born in Miami, where his parents had gone to bring tomatoes from their farm in the Bahamas. He spent his early years on the island before moving to Miami and then to New York City.

After a short time in the army, Poitier returned to look for a dishwasher job in the Harlem neighborhood of New York when he saw an advertisement seeking actors at the American Negro Theater. Poitier had never seen a play in his life and could barely read his lines. The director sent him away.

He later told the Associated Press; he was so angry he decided: "‘I'm going to become an actor — whatever that is. I don't want to be an actor, but I've got to become one to go back there and show him that I could be more than a dishwasher.' That became my goal."

Poitier then made a deal to clean the theater in return for acting lessons. In 1950, Poitier received his first movie part in No Way Out. He played a doctor whose patient, a white man, dies and is then mistreated by the patient's brother.

Hillel Italie reported this story for The Associated Press. Hai Do adapted it for VOA Learning English.

inspire –v. to make (someone) want to do something; to give (someone) an idea about what to do or create

grace –n. a controlled, polite, and pleasant way of behaving

entertain –v. to perform for people by singing, acting or some similar performance

revealing –adj. giving information about something that was not known before