Update Required To play the media you will need to either update your browser to a recent version or update your Flash plugin.
By Christopher Jones-Cruise
18 January, 2016


The government of Sierra Leone is investigating an agreement to import waste from Lebanon.

The agreement permits the import of non-hazardous waste into Sierra Leone. It does not permit the import of toxic or dangerous materials.

The agreement was negotiated by Ibrahim Ben Kargbo. He is a former minister and senior presidential aide. He was recently elected to parliament. 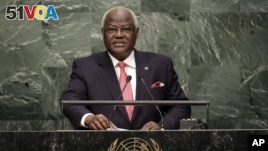 In a statement released Monday, the government said it did not give permission to Kargbo to negotiate the deal. It said President Ernest Bai Koroma had ordered an investigation of the deal.

It said it understands the health and environmental risks of toxic wastes and would not expose its citizens to such wastes.

Kargbo told VOA that the agreement was part of a deal to build a fertilizer factory. He said he wrote a letter of agreement to a representative of a Dutch farm in Lebanon "who said he wanted to come here and set up a plant to manufacture fertilizer. I did inform him in that letter that if he wanted to go through the process of investing in this country, he should be very certain that, even if it is utilizing domestic waste, it should be toxic-free."

Kargbo also said he told the representative that none of the imported waste can be toxic and that the agreement had to be approved by the government.

On Monday, investigators questioned Kargbo. He says he told them the letter of agreement came from his office. But he says the investigators released him because there was nothing illegal about the agreement.

He says he protected his country from the import of toxic waste. He said he was only working with the Dutch company to build a fertilizer factory in his country, which does not have such a factory.

VOA's James Butty reported on this story. Christopher Jones-Cruise adapted it for Learning English. Kathleen Struck was the editor.

Do you believe your country should permit the import of non-hazardous waste? We want to hear from you. Write to us in the Comments Section, or visit 51VOA.COM.

expose – v. to cause (someone) to experience something or to be influenced or affected by something, sometimes negatively (often + to)

utilize – v. to use (something) for a particular purpose