Update Required To play the media you will need to either update your browser to a recent version or update your Flash plugin.
By Bryan Lynn
14 October 2022


Silent films established America's movie industry. But many of these films from the early 1900s no longer exist.

A new project aims to capture the flavor of these movies by digitizing old advertisements for them and publishing the materials online.

The idea for the project came from Chicago-based collector Dwight Cleveland. He is cooperating on the effort with a professor and students at Dartmouth College in New Hampshire. 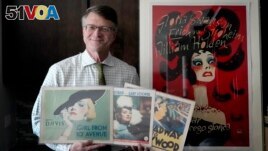 Cleveland is a property developer who became interested in the silent movie advertisements, also called cards, as a high school student in the 1970s. He was introduced to some real cards by his art teacher at the time, who had a small collection.

Cleveland recently told The Associated Press he "fell in love" with the colors, graphics and other elements used in the movie cards. The early experience made him want to start his own collection. "It just sort of screamed out, ‘Take me home!'" Cleveland said.

The cards were made to be placed inside the area outside theater entrances, also known as lobbies. The cards informed filmgoers about what movies were currently playing as well as films that would arrive next. They publicized all that early Hollywood had to offer, including comedies, love stories and action movies.

Cleveland told the AP that about 90 percent of all silent films have been lost. One of the main reasons for this is that the chemicals used to make many of the early films broke down over time. Many silent films were also destroyed in fires.

"What that means is that these lobby cards are the only tangible example that these films even existed," Cleveland said.

The cards, traditionally measuring 28 by 35 centimeters, were placed in sets of eight or more. They showed a film's name, production company, actors and more. The cards were meant to give moviegoers a preview of the films. Today, they capture the stars and storytelling methods that existed during America's silent film period, or era.

At the time, movie trailers – the brief video introductions of upcoming movies we still see in theaters today – were not common.

The early lobby cards were produced using a process that mostly used black, white and brown designs. Other colors were often added in later by hand, writes Josie Walters-Johnston. She is a librarian in the Moving Image Research Center at the U.S. Library of Congress.

By the 1920s, the images began to look more like pictures and included more complex design details. The cards were placed in theaters for many years, but production stopped in the late 1970s or early 1980s, Walters-Johnston wrote.

Cleveland has been sending examples from his personal collection to Dartmouth's Media Ecology Project. The effort is led by Mark Williams, an associate professor of film and media studies. He oversees a small group of students who remove each card from its protective covering to scan and digitize.

When completed, the lobby card collection will become part of Dartmouth's Early Cinema Compendium. It is a large collection of rare and valuable elements relating to early and mostly lost American films. The compendium will be published online with financial help from the National Endowment for the Humanities.

Williams said the main goal of the project is to make the material available to early movie fans and scholars alike. He added that he hopes publishing the collection will "catapult new interest" in the silent film era.

flavor –n. the quality of something, usually related to taste

graphics – n. or of related to the pictorial arts

tangible – adj. something real that can be seen, touched, measured, etc.

preview – n. a short film that advertises a film or television program

scan –v. to use a machine to read or copy something into a computer

scholar – n. someone who has studied a subject and knows a lot about it

catapult – v. to make something move through the air quickly and with great force