Update Required To play the media you will need to either update your browser to a recent version or update your Flash plugin.
By Anna Matteo
24 October, 2015


From VOA Learning English, this is Words and Their Stories.

I'm Anna Matteo and today I'm going to solve all your problems.

With a silver bullet.

If you don't believe me, that is a good thing. 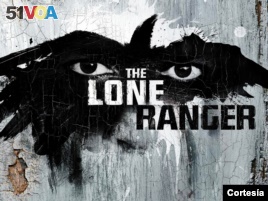 The Lone Ranger is an iconic U.S. character in books, comics, radio, television and movies. His calling card is a silver bullet. (FILE PHOTO)

We all know that there is no such thing as a silver bullet that can make everything better. But that does not stop us from using the word "silver bullet."

A silver bullet is a way to make everything better.

The belief that there is magical power in the metal silver goes back to ancient Greece. In the stories of other cultures, a silver bullet is the only way to defeat monsters like werewolves and witches.

Writer Stephen King is considered by many in the United States to be the master of scary stories. His book "Silver Bullet" is about a man who turns into a werewolf with every full moon and attacks people in a small town.

A werewolf is a make-believe half-man, half-wolf beast that can only be killed by a silver bullet. As with many of King's books, "Silver Bullet" was made into a film in 1985. Here is a bit from the trailer:

Silver bullets also have roots in an early American cultural icon, a famous character everyone knew.

The Lone Ranger was a Texas Ranger, a type of lawman. When his entire team was attacked and killed, he was left alone -- hence the name, Lone Ranger.

In his new identity he wore a mask. On horseback, he looked for the bad guys in the American West and brought them to justice.

In some of the radio and television shows, the Lone Ranger used bullets made from the precious metal silver as a symbol of justice and law and order. The silver bullet was also to remind himself and others that life, like silver, has value and is not to be wasted or thrown away.

The Lone Ranger's calling card, or the thing he left behind to identify himself, was a silver bullet.

Other words for "silver bullet"

The term silver bullet has its roots in pop culture. But there are other words that are close in meaning.

Panacea sounds more formal and bookish. It has Latin and Greek roots. The Latin word "panacea," means an herb that would heal all illnesses. The Greek word "panakeia" means "cure-all."

Cure-all does just what it says – it cures all. Cure-all is used often in spoken English. It is not as formal as panacea and doesn't have the cultural or romantic feel as "silver bullet." But cure-all certainly does the job.

Sometimes "silver bullet" is hyphenated and used as an adjective, such as in this example: Thinking that more money is going to fix failing schools is a silver-bullet fantasy. You just can't throw money at a problem and wish it away.

Of course, if something promises to be a panacea, a silver bullet for all your problems ... it, most likely, is not. That's why these terms are often used in the negative form.

There is no silver bullet to fix homelessness in the United States. There is no panacea to cure all the world's ills.

So, if someone wants to sell you a silver bullet to cure all your troubles ... don't buy it.

Let us know if you have an expression similar to "silver bullet" in your language. Let us know on 51VOA.COM or in the Comments section.

Anna Matteo wrote this story for Learning English. Kathleen Struck was the editor.