Update Required To play the media you will need to either update your browser to a recent version or update your Flash plugin.
By John Russell
15 August 2022


New research suggests that even a simple exercise program might help older people with light, or mild, memory problems.

Doctors have long advised patients to do physical activity to help keep their brains healthy. But the U.S. government-supported research marks the longest study of whether exercise makes any difference once memory starts to decline. 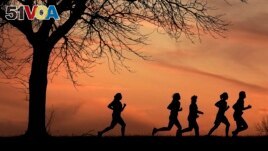 Half of the older adults did aerobic exercises, and the rest did stretching and balance movements that raised their heart rates a little.

People in both groups got attention from trainers who worked with them at youth organization centers called YMCAs around the United States. When COVID-19 shut down gyms, the trainers helped the study participants keep moving at home by video calls.

After a year, testing of mental activity showed neither group had worsened, said lead researcher Laura Baker of Wake Forest School of Medicine in the state of North Carolina. Brain scans did not show the shrinkage that often goes with worsening memory problems, she said.

By comparison, similar MCI patients in another long-term study of brain health — but without exercise — experienced cognitive, or mental, decline over a year.

The early findings are surprising. But the National Institute on Aging cautioned that tracking non-exercisers in the same study would have offered better evidence.

The results suggest "this is doable for everybody" — not just seniors healthy enough to work up a hard sweat, said Baker. She presented the data recently at the Alzheimer's Association International Conference. "Exercise needs to be part of the prevention strategies" for at-risk seniors, she added.

Maria Carrillo is the Alzheimer's Association chief scientific officer. She said earlier research has found regular physical activity of any kind may reduce damaging inflammation and increase blood flow to the brain.

She added that the new study is especially interesting because the COVID-19 pandemic began halfway through the study. That meant the study participants became socially isolated, or separated from others. Social isolation has long been known to increase people's risk of memory problems, Carrillo said.

It is a difficult time for dementia research. Doctors are not sure about prescribing a high-priced new drug called Aduhelm. The drug is supposed to be the first to slow the progression of Alzheimer's — but it is not yet clear if it really helps patients.

Researchers last month reported another drug that works similarly failed in an important study. It, too, targets amyloid plaques in the brain.

There is growing urgency to find whether exercise and other steps might offer at least some protection.

How much and what kind of exercise?

In Baker's study, seniors were supposed to get moving for 30 to 45 minutes four times a week. It did not matter whether it was exercise on the treadmill device or stretching exercises.

Baker believes the social connection with the trainers helped. Each participant completed over 100 hours of exercise.

"We wouldn't have done the exercise on our own," said Doug Maxwell of Verona, Wisconsin, who joined the study with his wife.

The husband and wife, both 81, were assigned to the stretching classes. They felt so good afterward that when the study ended, they bought electric bikes in hopes of even more activity.

Baker suspects that the volume of exercise might explain why even the simple stretching added up to a health benefit. Participants were supposed to exercise without social support for an additional six months. Baker has not studied that data yet.

In addition to the recent study, Baker is leading an even larger study of older adults to see if adding exercise to other steps such as a healthy diet, brain games and social activities may reduce the risk of dementia.

aerobic –adj. strengthening the heart and lungs by making them work hard for several minutes or more

gym (gymnasium) –n. a building or room for exercise

participant –n. a person who is involved in an activity or study

scan –n. a picture produced a special machine to see inside of something like the human body

dementia – n. (medical) a mental illness that causes someone to be unable to think clearly or to understand what is real and what is not real

prescribe – v. to officially tell someone to use (a medicine, therapy, diet, etc.) as a remedy or treatment