Update Required To play the media you will need to either update your browser to a recent version or update your Flash plugin.
By Jonathan Evans
14 August 2021


The government of Singapore has created a highly developed system that turns wastewater into drinking water.

The system involves a network of tunnels and high-technology treatment centers. 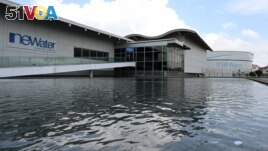 This picture taken on July 27, 2021 shows a tank (R) for processed used water storage outside the Bedok NEWater plant in Singapore.

Most of the water is used for microchip manufacturing centers and cooling systems in buildings. But some of it is added to the country's drinking water supplies.

The system helps reduce ocean pollution, as only a small amount of the treated water is sent into the sea.

The United Nations estimates that 80 percent of the world's wastewater flows back into the oceans without being treated or reused.

Singapore has few natural water sources. The island nation has long had to depend mostly on supplies from neighboring Malaysia.

Low Pei Chin is chief engineer of the water reclamation department of the Public Utilities Board. She told reporters with Agence France-Press, "Singapore lacks natural resources, and it is limited in space, which is why we are always looking for ways to explore water sources and stretch our water supply."

One major plan is to "collect every drop" and "reuse endlessly," she added.

The Changi Water Reclamation Plant on Singapore's eastern coast is the main part of the country's recycling system.

Parts of the water treatment center are underground. Wastewater enters the center through a 48-kilometer tunnel that is linked to sewers.

The center contains a large system of steel pipes, tubes, tanks, cleaning systems and other machinery. It can treat up to 900 million liters of wastewater a day.

In one building, a network of air flow systems has been put in place to keep the air smelling as fresh as possible.

Waste that arrives at the plant goes through a cleaning process before powerful pumps send it flowing to areas above ground for more treatment.

There, the treated water receives additional cleaning. Bacteria and viruses are removed through highly developed cleaning processes and disinfected with ultraviolet radiation.

Singapore is also in the process of expanding its recycling system.

The country will add another underground tunnel and a major water treatment center to serve the western half of the island. Officials expect work on the center to be completed by 2025.

By the time the expansion is finished, Singapore will have spent about $7.4 billion on its water treatment systems.

Jonathan Evans adapted this story for Learning English based on a report from Agence France-Presse. Ashley Thompson was the editor.

reclamation – n. the act or process of recovering; the state of being recovered

sewer – n. a usually covered drain to carry off water and waste

tunnel – n. a passage that goes under the ground, through a hill, etc.

ultraviolet – adj. used to describe rays of light that cannot be seen and that are slightly shorter than the rays of violet light