The British artist's 2014 album, "In the Lonely Hour," was about the painful break-up he experienced last year with someone he loved. But Smith noted the happy ending. He accepted his final award for Record of the Year by thanking the one who broke his heart, "cause you got me four Grammys," he said.

The big surprise of the night was in the Album of the Year category. Many expected Beyoncé to win for her self-titled album. But musician Beck took home the award for his album "Morning Phase."

The recording was also honored with the Best Rock Album award. 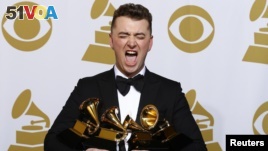 Sam Smith holds his four Grammys in the press room at the Grammy Awards in Los Angeles, California, February 8.

Kanye West played a little trick on Beck and the crowd at the Staples Center. He jumped up on stage as Beck was accepting the award. The move was similar to the bad behavior he displayed at the 2009 Video Music Awards. At that event, West interrupted Taylor Swift's acceptance speech to tell the crowd that Beyoncé deserved the award that Swift had just received.

However, Sunday night, West left the stage immediately, laughing. The audience realized it was just a prank. West even fooled Beyoncé's husband, Jay-Z, who gave a look of horror when West jumped on the stage.

Beyoncé did not go home with empty hands Sunday night. She won three Grammys, including Best R&B Song and Best R&B Performance for her song, "Drunk in Love." 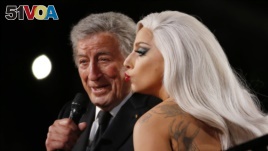 Lady Gaga and Tony Bennett performing at the 2015 Grammy Awards.

?Critical opinion was mixed about the musical performances at the Grammy Awards. Most critics praised Lady Gaga and Tony Bennett for their delivery of "Cheek to Cheek."

And the crowd roared for the performance of Sia's song, "Chandelier." Actresses Kristen Wiig and Maddie Ziegler danced to the song. 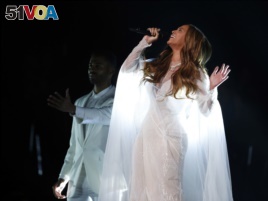 Beyonce performs at the Grammys.

Opinion was not as singular when it came to Beyoncé's performance of the gospel song, "Take My Hand, Precious Lord." Many critics praised it, but social media posts show a mixed reaction.

Many tweets expressed anger that the Grammy Awards changed the plan for the song last week. Reports say Ledisi had been set to perform the song but Beyoncé asked to take her place.

Other posts on social media had some fun with the clothing fashions of the night. Some wrote that Rihanna's large, bright pink dress looked like a "cake topper."