Update Required To play the media you will need to either update your browser to a recent version or update your Flash plugin.
By Dan Friedell
23 April 2022


Popular singer Taylor Swift is expected to be one of the well-known people speaking to students and their families at graduation events in the United States this May.

The singer planned to perform in places around the world in 2020. But she canceled her tour because of the COVID-19 pandemic.

However, if you are a family member of a 2022 New York University graduate, you will be able to see Swift next month. 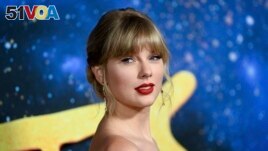 FILE - Taylor Swift canceled her tour in 2020 due to the COVID-19 pandemic, but she will be back in public in May at the NYU graduation.

The performer is receiving an honorary degree at the university's graduation ceremony, also called commencement, on May 18. The event will be held at Yankee Stadium, the home of the famous baseball team.

Swift is one of many well-known people who will be speaking to students and their families at graduation events in May.

Fauci is director of the U.S. National Institute of Allergy and Infectious Diseases, a division of the Department of Health and Human Services. He has been the top U.S. infectious disease official during the pandemic. Fauci will speak at Princeton University in New Jersey on May 23.

Perry will speak on May 9 at Emory University in Atlanta. Perry is an actor and movie maker known for creating the humorous character Madea. But he is also known for parts in Precious, Gone Girl and Don't Look Up.

Ardern won praise for strong policies at the beginning of the COVID-19 pandemic. Those policies are credited with keeping case numbers low in New Zealand. She will speak at Harvard University on May 26.

NYU students graduating next month told the publication Inside Higher Ed that they are already being contacted by strangers. People are asking to buy their tickets for hundreds of dollars. NYU students only receive two tickets to the event, which normally go to their parents.

Sean Nesmith is graduating in May. He used Twitter to post the image of a message he received from a person asking for his tickets to the event.

The person said they would "make a huge sign" and cheer for Nesmith using a device that increases the sound of your voice called a megaphone. "I promise I will be your biggest fan there," the person wrote.

NYU's president is Andrew Hamilton. He said the 2022 commencement is exciting since it is the first time since 2019 that NYU will be able to correctly honor its graduates.

"I cannot overstate how thrilled I am to be coming together in person," Hamilton said in a story posted on NYU's website.

The university will have two events, in fact. One honoring the class of 2022 will be held in the morning. That one includes Swift. Another one honoring students from 2020 and 2021 will take place in the evening.

Fauci will speak at the Princeton event known as Class Day. It takes place the day before the school's commencement. The university's Class Day is organized by a group of students. It will be the first time the event will be held in person since 2019.

The organizers of the event said Fauci played a big part in helping students have a "much more normal senior year." They credited his work on public health policy during the pandemic.

At Harvard at the end of May, Ardern will be the main speaker at the university's event for graduates. President Lawrence Bacow noted Ardern's efforts to deal with such issues as gender equity and climate change, in addition to her work keeping New Zealand safe during the early days of the pandemic. He praised Ardern's "compassionate leadership."

Harvard will hold a separate event later in May for students who graduated in 2020 and 2021 who could not attend their graduation in person.

At Emory University in Atlanta, Tyler Perry will be the main speaker at the school's graduation on May 9. Perry centers his movie production in Atlanta.

Universities sometimes pay their famous commencement speakers. In 2016, the Associated Press wrote that Rutgers University in New Jersey paid writer Toni Morrison $30,000 in 2011 and the University of Houston paid actor Matthew McConaughey $166,000 to speak in in 2015. The actor donated the money to charity.

A spokesperson for Kean University in New Jersey said a well-known speaker "makes their commencement just that much more memorable."

Some schools including Harvard and the University of California-Berkeley usually do not pay their speakers. Others only pay travel costs. The honor of speaking at Harvard seems to be payment enough for people, such as movie director Steven Spielberg, who spoke in 2016.

Speaking to CNN last year, Scott Jaschik from Inside Higher Ed, described what he thinks students want from a commencement speaker.

He said: "Students expect somebody who is reasonably famous and who will inspire them in some way."

tour –n. a series of related performances or appearances

graduation – n. a ceremony at which degrees or diplomas are given out

ticket – n. a piece of paper or other sign that lets a person see an event, show or performance

overstate –v. to say that (something) is larger or greater than it really is

thrill – adj. to cause (someone) to feel very excited or happy

compassionate – adj. showing concern for people who are sick, hurt, poor or in difficulty

charity –n. the act of giving money, food, or other kinds of help to people who are poor, sick