Update Required To play the media you will need to either update your browser to a recent version or update your Flash plugin.
By VOA
10 November, 2015


What's the biggest online shopping day in the world?

Not Cyber Monday or Black Friday. They are the days that follow Thanksgiving in the U.S. and usher in the start of the holiday shopping season. 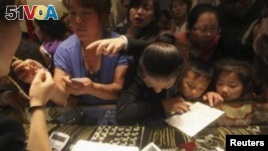 Singles' Day in China is the biggest online shopping day in the world. It was created in 2009 by Alibaba's CEO Daniel Zhang to increase online sales. Since then, it has grown into a cultural phenomenon.

Singles' Day began as a day for unmarried or uncoupled people to celebrate their lives. Single students, looking for an excuse to buy themselves presents, started it on November 11, 1993, reported The Guardian.

It is symbolized by the four number ones in the date of November 11 – 11.11— and is also called Double Eleven, in reference to the day it was started, said the BBC.

It became a major shopping day in 2009. The CEO of an online shopping site -- Alibaba -- sought to increase sales at the e-commerce company. The CEO, Daniel Zhang, launched an annual online sale that day, said Fortune.

When it first began, "Singles' Day was very much an offline solace for actual single people," noted the website Atlas Obscura. "A small group of students at Nanjing University are said to have chosen 11.11 as a day that singles could do activities like karaoke together."

It quickly became a cultural phenomenon.

Last year, Alibaba sold more than $1 billion worth of products in the first three minutes of the sales, reported Bloomberg. Total sales on Singles' Day soared to $9 billion within 24 hours.

That's four times bigger than Cyber Monday in the U.S., which is the Monday after Thanksgiving and traditionally a big shopping day.

Today, Singles' Day is a retail blockbuster. Analysts predict that this year, sales on China Singles' Day will soar to a new high.

In the U.S., Dealmoon is a shopping site targeting Chinese-Americans. Jennifer Wang is co-founder of the company:

"We expect to have 3 million people coming to our site for the Singles' Day launch."

Some observers think Singles' Day could catch on globally.

In West Hollywood, California, a group launched an American version of the event on January 11, 2014, reported Atlas Obscura. They want to make 1.11 an official American holiday, "a day of recognition for those who find themselves on the other side of the couple's fence," according to the website.

Do you celebrate Single's Day? What did you buy yourself? Let us know in the Comments section below, or on our 51VOA.COM.

online – n. done over the Internet

shopping – n. the activity of visiting places where goods are sold in order to look at and buy things (such as food, clothing, etc.)

usher in – phrasal verb to happen at the beginning of (something, such as a period of activity) and usually to help cause it

reference - n. the act of mentioning something in speech or in writing : the act of referring to something or someone

offline – adj. not connected to a computer, a computer network, or the Internet

solace – n. someone or something that gives a feeling of comfort to a person who is sad, depressed, etc. : a source of comfort

phenomenon – n. someone or something that is very impressive or popular especially because of an unusual ability or quality

soar – v. to increase very quickly in amount or price