Update Required To play the media you will need to either update your browser to a recent version or update your Flash plugin.
By Rebecca Widiss
23 September, 2014

If you are sitting down listening to this Health Report, stand up. Move your legs. Touch your toes, if you can. Do anything but sit.

If you cut down on the time you spend sitting, you might live longer. New research shows that sitting less than three hours a day might extend your life by two years. 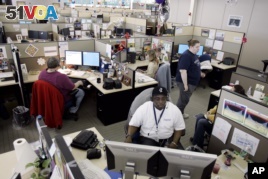 In this 2007 file photo, employees of PayPal work in their cubicles in La Vista, Nebraska.

The human body is designed to move. But modern lifestyles and office jobs rarely give us the chance to move around.

Just the opposite, says Peter Katzmarzyk. He is a scientist at the University of Louisiana in the southern United States. He says that sitting is ubiquitous in our lives, meaning it is something we do all the time, everywhere. But, he adds, that does not make sitting good for us.

"Sitting is ubiquitous in our lives today. You know, we sit while we're eating, we sit in the car, we sit while we watch TV. And many of us sit for many hours at work. So on average, Americans report that they sit between four and a half to five hours a day."

Exercise is important. But so is not sitting.

Mr. Katzmarzyk says you may exercise often. But, he says even that does not mean you can sit for the rest of your waking hours.

"We can't throw away physical activity. It's extremely important. We have 60 years of research showing us that. But sedentary behavior is also important -- even if you exercise for 30 minutes a day. What goes on in the other 23-and-a-half hours a day is also very important."

Mr. Katzmarzyk and his co-workers, or colleagues, are part of a new generation of researchers studying how sitting all day affects length of life. Such studies are rare.

"This is a relatively new area of study - studies that have assessed the relationship between sitting and mortality or television viewing and mortality are very rare. There's only been a few of them, actually five or six now, in the last four or five years."

Mr. Karzmarzyk and his colleagues used the few rare studies available to them. They found that cutting television time to less than two hours a day could add one-point four years to life.

Change is already coming to some offices, especially in the design of desks. A "standing desk" lets people stand while they work. Another new design is called the "treadmill desk." A treadmill is an exercise machine that lets you walk in one place. Even some U.S. schools are beginning to experiment with desks that are part bicycle to keep children moving. 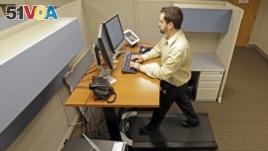 "That's one of the strategies that many companies are using now. They may have got five standing desks for their employees or a treadmill desk. I've heard of other companies where they may not buy one for everybody .. but they'll have a bank of these desks where people can go for an hour a day and answer their emails or talk on the phone."

Mr. Katzmarzyk says studying this problem has inspired his team to make a few changes in their own lives.

"As a university professor, you know, it is a very sedentary occupation. We're chained to a desk in terms of writing papers and doing research. We really try to limit the amount of time we spend doing that."

If you work in office job or have a sedentary job, Mr. Katzmarzyk and his team suggest a few simple changes:

All these activities may help you live longer.

Research on the good effects of sitting less is published in the online journal, British Medical Journal Open.

ubiquitous - (adj.) existing or being everywhere at the same time

mortality - (n.) the quality or state of being a person or thing that is alive and therefore certain to die

treadmill – (n.) an exercise machine which has a large belt that moves around while a person walks or runs on it

inspire – (v.) to make (someone) want to do something