Skeleton of T. rex Relative Will Be Auctioned This Month

Update Required To play the media you will need to either update your browser to a recent version or update your Flash plugin.
By Dan Friedell
08 July 2022


The auction house Sotheby's plans to sell the fossilized skeleton of a dinosaur related to the famous T. rex later this month.

Gorgosaurus lived about 10 million years before T. rex in what is now the western United States and Canada.

The skeleton was found in 2018 in the American state of Montana, not far from the Canadian border. 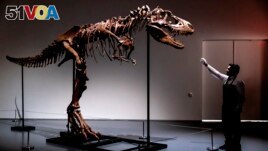 A Sotheby's New York employee demonstrates the size of a Gorgosaurus dinosaur skeleton, the first to be offered at auction, Tuesday, July 5, 2022, in New York. (AP Photo/Julia Nikhinson)

The creature was the top meat-eater of its time during the late Cretaceous period, about 76 million years ago.

The fossil is valued between $5 and $8 million. All other known skeletons of its kind are already kept in museums around the world.

The skeleton is about 3 meters tall and 10 meters long.

Cassandra Hatton is the global head of science and popular culture for Sotheby's. She called the fossil "unbelievable." She said she has seen few things in her career that "inspire wonder and capture imaginations" like the Gorgosaurus skelton.

The auction is planned for July 28.

auction– v. a public sale at which items are sold to the people who offer to pay the most

fossil –n. something (such as a leaf, skeleton, or footprint) that is from a plant or animal which lived in ancient times and that you can see in some rocks

unbelievable – adj. used to describe something that is so good it is difficult to believe

inspire –v. to cause someone to have a feeling or emotion