Update Required To play the media you will need to either update your browser to a recent version or update your Flash plugin.
By VOA
10 November, 2014
51VOA听写整理，转载请注明出处。文本仅供参考，欢迎纠错！

In many countries, when cows are killed for meat, the heads are put in the waste. That is because many people do not believe meat from a cow head should be eaten. But in South Africa, some people have a strong desire for cow head meat. Many people are selling and eating it in Johannesburg. VOA recently visited a cow-head processing factory in the city.

In South Africa, the meat is called "skop." The men who eat it say it is less costly than other meats and more tasty.

Some meat sellers in Johannesburg recently learned how to prepare cow heads for their customers. They remove the skin from the head. Then they use an axe to separate the meat from the bones. 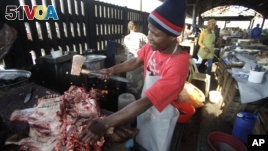 William Mahlangu works at a cow head processing factory. Up to 150 cow heads are processed there each day.

"This meat is delicious, it's tender and it's very, very nice meat for men. Even in, even in the old days, like our grandfathers, if they slaughter a cow, the cow head it was only for men."

Much of the skop meat is sold to sellers who sell food on the street. But at the factory, they also cook the meat for customers. Then they put the meat on a large table, not on plates. They put hot sauce on it, and a starch called "uPhuthu."

Kenneth Ayudo is a Nigerian food shop owner living in Johannesburg. He says in Nigeria people even eat the skin after they roast it over a fire to remove the hair. Then they wash the skin like a piece of cloth.

"It's the way it tastes and there is too much demand for it and everywhere now because anyone that eat it wants, wants, want to eat it again."

Peter Antill goes to a skop restaurant every day.

"One thing I can tell youse guys is that this is the best you will ever taste in town, in town, in the city Johannesburg. It's skop! It's skop! Eish! Nom, nom, nom! Yeah!"

Because of worries about mad cow disease, which causes the brain to waste, few people in western countries eat cow brains or organs such as livers or kidneys. But South Africa's government says mad cow disease has never been found in cows in the country.

Many men in South Africa think skop meat not only tastes great but also helps them with their sexual desires. And they say it is strongest in cow head soup, which they eat after they have skop.