Update Required To play the media you will need to either update your browser to a recent version or update your Flash plugin.
By John Russell
02 December 2020


There is little to do in Norcatur, Kansas. It has a service station, a building for storing grain, and a weekend place where the locals play pool, eat pizza and drink beer.

Yet COVID-19 still found this small, rural town, which is home to about 150 people.

In an old tradition, the town gathers for a potluck dinner at Christmastime. The event is known as the Norcatur Christmas Drawing. People donate meats, crafts and other treats. Usually, every family goes home with prizes. The 4-H Club, an agricultural organization for children, holds a sale of baked goods. Santa Claus comes to the event too.

But this year, the drawing has been canceled due to the coronavirus health crisis.

A recent statement in the town's newsletter and Facebook page announced the cancellation.

It blamed "lack of concern for others" for the action.

Decatur County has fewer than 3,000 people. Most people live on farms or in small towns like Norcatur. As of last week, the county had reported 194 coronavirus cases and one death. Medical providers say there have been at least four more deaths that have not been added to the official count.

Carolyn Plotts is a 73-year-old Norcatur resident. She only found out she was positive for COVID-19 when tested for a medical procedure in October. She never had symptoms.

Plotts said two of her former high school classmates who live in the county died because of the virus. Her husband also tested positive.

Plotts wondered whether the cancellation announcement was maybe "talking about me." During her quarantine, she would only leave her house to care for a housebound friend who still believes the pandemic is not real. Plotts said she left her house with her doctor's permission and wore a mask.

Carl Lyon is the Norcatur mayor. He said that most residents are "pretty good" about social distancing and wearing a mask, but some have caught the virus.

"I know a couple of people had it and they were still kind of running around," Lyon said. "Didn't seem to bother them that they infected everybody else."

Decatur County Sheriff Ken Badsky estimated that 5 percent of county residents who should quarantine violate the restrictions and go out. His office has called some and "insisted they do what they are supposed to do," but has taken no legal action.

"I have so much other stuff to do. I don't have time to follow people around," Badsky said. "We have 900 square miles [about 2300 square kilometers], we have three full-time officers and a part-time to take care of that and we are busy with everything else."

Stan Miller was the announcer for the Christmas Drawing for more than 25 years. He has mixed feelings about the decision to stop it this year. The 63-year-old Norcatur resident said he understands there are elderly people who could get the virus. But it is also disappointing. 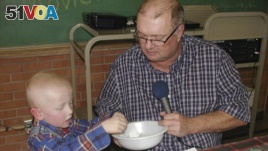 "I like to see all the joy, especially the little kids," Miller said. "We have Santa Claus after the drawing is over and to see them sit on Santa's lap and tell them what they want for Christmas, you know, always puts a smile on my face."

Roxana Hegeman reported on this story for the Associated Press. John Russell adapted it for Learning English. Susan Shand was the editor.

rural -- adj. of or relating to the country and the people who live there instead of the city

potluck – n. a meal to which everyone who is invited brings food to share

drawing -- n. an act of choosing something (such as a winning ticket) from a group without knowing which one you are choosing

pandemic -- n. medical: an occurrence in which a disease spreads very quickly and affects a large number of people over a wide area or throughout the world

mask -- n. a covering used to protect your face or cover your mouth

lap – n. the area between the knees and the hips of a person who is sitting down