Update Required To play the media you will need to either update your browser to a recent version or update your Flash plugin.
By VOA
24 June, 2012

FAITH LAPIDUS: And I'm Faith Lapidus. Many small, family-owned businesses in the United States are struggling to survive. Along with the sluggish economy, they face competition from big box chain stores and restaurants. This week on our program, we visit a Washington, DC area hardware store, drugstore and restaurant and learn how they are competing successfully for customers. 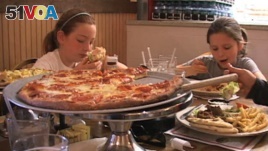 C.A. SAVOY: "Everything in here is home cooking. It's all fresh food and delicious."

Server Tina Mitrakas has worked at Primo's since it opened.

LYNNE SEPPLE: "My son has been here since he was six days old. He's been here once a week since then and now he's 10."

CHRISTOPHER CRUISE: Mary Wise often stops by Primo's after work. She plays the role of Martha Washington, wife of the first United States president, at nearby Mount Vernon. It is the home and property where George and Martha Washington once lived. Ms. Wise says enjoys Primo's because it feels comfortable.

MARY WISE: "It is a place where you can consistently have good food, not too expensive. You know you're never going to be confronted with something that's a surprise. I think people like that."

Another appeal, she says, is owner Jim Nicopoulos.

Everyone calls him Jimmy, including Mr. Savoy and his wife, who are long-time customers.

C.A. SAVOY: "We've become part of Jimmy's family now. He refers to Joyce and I as his mother and father."

FAITH LAPIDUS: Jimmy bought Primo Family Restaurant five years ago. It is truly a family business - from the photos on the wall, to the dining area, where his father-in-law seats patrons. And in the kitchen, Jimmy's cousin Spiro Routoulas prepares Greek specialties.

SPIRO ROUTOULAS: "He's a funny guy. He comes inside the kitchen and tastes what I make. Oh, it's fun."

Besides the food and friendliness, Jimmy says Primo's has another appeal over the chain restaurants.

JIMMY NICOPOULOS: "Chain restaurants have to go through a process of buying their food from large industries and distributors. We can get our produce local and our meats."

CHRISTOPHER CRUISE: Elizabeth Bessel notices the difference and stays away from the nearby chains.

ELIZABETH BESSEL: "I don't find the food to be that great. When I eat here, Jimmy will come to the table and tell us that he got that produce from somebody's farm."

Jimmy says he thinks there is room in the neighborhood for both family and chain restaurants. His customers agree.

FAITH LAPIDUS: One hundred years ago, Morgan Pharmacy opened its doors in Washington. Through economic ups and downs, the small, family-owned pharmacy has thrived. But how is it staying in business today with a larger drugstore just down the street? In the second part of our program on the survival of small businesses in the United States, we learn what Morgan Pharmacy is doing to keep its doors open.

CHRISTOPHER CRUISE: Morgan Pharmacy has an old fashioned feel, with a display of old prescription bottles and the original shelves from when the store opened nineteen twelve. Pharmacist Barry Deutschman bought the store twenty years ago.

BARRY DEUTSCHMAN: "During the time period between then, and the time we stopped carrying tobacco, you can see people would rest their cigarettes on counter here."

The pharmacy is located in a residential neighborhood of Washington and most people hear about it through word of mouth.

BARRY DEUTSCHMAN: "Once somebody comes in here who's has never been here, they love the place and they want to come back."

Sandra Sugar has been coming to Morgan's for years.

SANDRA SUGAR: "This has nostalgia just coming in here."

TONI STEPHENS: "The people who work here are helpful and more like family."

CUSTOMER: "It smells so good."

Others, Mr. Deutshman says, like items that are old fashioned.

After prescriptions, chocolate is the big seller.

CHRISTOPHER CRUISE: The number of independent pharmacies has been decreasing. The National Community Pharmacists Association says about twenty thousand exist today -- down by half from twenty years ago. They are being replaced by drug and supermarket chains, which often open up in the same neighborhood, and offer a wider selection of products.

But customer Abby Griffin says the chain stores are impersonal, so she comes to Morgan's.

FAITH LAPIDUS: Independents like Morgan Pharmacy often provide services the chain stores do not, such as compounding certain drugs and creams by hand and delivering prescriptions. Mr. Deutshman says the pharmacists also take the time to talk with customers and get to know them.

BARRY DEUTSCHMAN: "So it's more than just being the neighborhood pharmacist, it's being part of the community. You don't get treated like this in chain drug stores."

Mr. Deutshman hopes Morgan Pharmacy will be around for a long time.

BARRY DEUTSCHMAN: "I have the most wonderful clientele in the world. I have no plans on retiring. Our plan is to hang in there as long as we can."

CHRISTOPHER CRUISE: The popularity of large home improvement stores in the United States has made many neighborhood hardware stores a memory. But one family-owned hardware store near Washington is beating the odds and business is better than ever. Next we take you to a hardware store that has been around for more than one hundred years.

FAITH LAPIDUS: Welcome to Browns Hardware in Falls Church, Virginia, where you can find a wide variety of hardware and other items. Browns brings back memories for customer Dennis Kraft.

DENNIS KRAFT: "The thing that reminds me of the stores when I was in as a kid is that the shelves are stacked to the ceiling."

Hugh Brown has owned the store for more than fifty years.

Everyone calls him Mr. Brown, even John Taylor, the store manager for fifteen years.

JOHN TAYLOR: "He's a great guy to work for. It's almost like working with your dad."

At eighty-three years old, Mr. Brown is the third generation to run this family business. It was founded by his grandfather in the late eighteen hundreds, then handed down to Mr. Brown's father.

He thinks the store has been successful because the customers come first.

HUGH BROWN: "We try to take care of them when they come in. Try to have the merchandise that they want."

Bobbi Beck has been coming in for thirty years to buy items for her jewelry business called "Hard Wear."

BOBBI BECK: "The people who work here are like family to me."

JOHN TAYLOR: "They know we won't sell them something that they don't need. Some people will come in and talk to us for twenty and thirty minutes after a sale if we're not busy. We have a good time."

FAITH LAPIDUS: Despite its success, this neighborhood landmark could disappear. Competition from large, national home improvement warehouses, known as big box stores, is driving many small hardware stores out of business. Browns' customers say they do not want that to happen here.

JOHN GRAYZEL: You can find things that you can't find at a gigantic store that's ten times as big."

SHIRLEY STREET: "You can always find someone to help you here, and someone who knows what you need. It's a personal touch and you cannot find that at a big box store."

CHRISTOPHER CRUISE: Many big box stores also do not provide services like fixing screens. And instead of having to buy a box of nails at the big box stores, Mr. Brown sells individual nails that are weighed on a scale made in nineteen twelve.

HUGH BROWN: "They just want a few, and they love to come back here, and pick out what they want."

The store also carries soap that Mr. Brown remembers from his youth.

HUGH BROWN: "There's no perfume in it or anything. It's just a heavy laundry soap."

Mr. Taylor says some people come in just to look around, and find unusual items like an owl that scares birds out of gardens.

And this fly zapper.

With no family of his own, Mr. Brown plans to pass the store on to Mr. Taylor. When that happens, a new family tradition may begin.

JOHN TAYLOR: "My son works here. He's been working here since he was in high school."

CHRISTOPHER CRUISE: And I'm­­­­­­­­ Christopher Cruise. You can find videos about today's program on our website, 51voa.com. You can also find transcripts and MP3s of our programs, along with podcasts and activities for learning English. Join us again next week for THIS IS AMERICA in VOA Special English.
Related Articles
go top