Update Required To play the media you will need to either update your browser to a recent version or update your Flash plugin.
By Mario Ritter
28 March, 2017


The Cambodian government has ordered a limit on interest rates on small loans. The decision comes before local elections are set to take place in June.

The 18 percent limit on the microfinance industry interest rates takes effect on April 1.

Microfinance businesses operate in many developing countries. They accept deposits and provide small loans to people in the developing world. 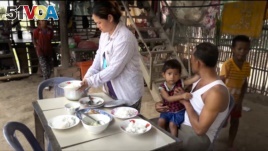 In Sokai is a 32-year-old Cambodian garment worker. She recently received a microfinance loan of $5,000. She must repay it within four years.

"I borrowed $5000 and I bought chickens, built the house, and my husband bought a boat, fishing nets and other items," she said.

She will pay interest at a rate of 22 percent a year.

The new legislation will not reduce her loan payments because the law has not yet taken effect.

Sokai had not heard of the new law. But it has caused a lot of concern among the private microfinance businesses in Cambodia.

Microfinance loans are usually for less than one year. Their interest rates are very high -- 30 percent or more. Microfinance industry supporters say this is necessary because the costs of servicing small, risky loans are higher.

The high cost of the loans has not reduced demand, however.

Cambodia's microfinance industry is growing quickly. In 2015, there were 1.5 million depositors and more than two million borrowers. MFIs are in every province of the country of 15 million people.

Almost all the loans go to people living outside Phnom Pehn, Cambodia's capital. Most borrowers are women.

The new law comes before local elections in June. A national vote is to take place in the middle of 2018.

Borrowers often use their land or home as a security for the loan. They can lose their property if they are unable to pay.

Interest rate limits are not unusual. Many countries have them. But, the World Bank says they are becoming less popular.

Some industry observers, however, say the law limiting interest rates will have a negative effect. Stephen Higgins is with Mekong Strategic Partners. The company gives business advice.

"Ideally we shouldn't have this cap. The interest rates in Cambodia for these small loans, they're actually amongst the lowest in the world. And people forget that."

Higgins says the cost of lending for small loans is high. He says microfinance businesses need to charge a 30 percent interest rate for a $500 nine-month loan to make a small profit.

Opponents of the limits say microfinance businesses may stop offering loans. That, they say, will force rural people to go to moneylenders who charge much higher interest rates.

The Cambodia Microfinance Association (CMA) is a non-profit organization based in Phnom Penh. It supports microfinance businesses. It says its members will need to reduce costs and become more efficient in order to survive.

Mey Kalyan is an economist and adviser to the government. He supports the law. He says it will help protect small farmers from agriculture-related debt. He says that farmers who take out high interest loans of 30 percent or more struggle to make a profit.

CMA chairman Hout Ieng Tong says at least some CMA members will still offer small loans. But it is unclear whether the new interest rate limit will hurt deposits in microfinance businesses or will drive borrowers to higher-cost moneylenders.

cap –n. a limit on something