Update Required To play the media you will need to either update your browser to a recent version or update your Flash plugin.
By Alice Bryant
16 November, 2017


Voters in Helena, Montana, have elected Wilmot Collins as their new mayor. Collins is a former refugee from Liberia. He is also the first black mayor in the state of Montana.

The story of his success in America has created interest around the world.

"There are no limits," Collins told VOA. "I arrived in this country with 25 cents in my pocket. Do you think I was thinking of ever running for mayor? No! But I worked hard and I had the support of my family and my community."

Collins says he tells his children with those things in place, "There is no reason why you can't succeed at what you attempt to do."

Collins and his wife, Maddie, were part of a large group of Liberians that fled the civil war in that country in the early 1990s. Two of his brothers were killed in the war. The couple escaped to Ghana but were starving there. 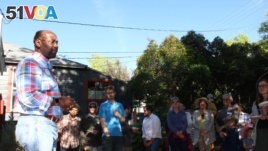 In his run for mayor of Helena, Montana, Wilmot Collins said he wanted to beef up fire, police and other emergency services and create affordable housing for homeless veterans and teenagers. (Wilmot Collins for Mayor/Facebook)

So, Maddie Collins reached out to an American family she had lived with as an international high school student in Helena. As a result, she was offered a college scholarship in the same town.

About two weeks before leaving Ghana for the United States, the Collins learned that they were expecting a baby. They decided that Maddie should still go to the U.S. Wilmot would follow as soon as possible.

He tried to get a visa but was denied. After several more failed attempts, Wilmot Collins requested refugee status through the United Nations High Commission for Refugees.

"When I was finally allowed to come to America, my little daughter was turning two years old. That was the first time I had ever seen her. That was February 17, 1994."

He was 31 years old when he finally reached America. The mayor-elect Collins says he realized immediately that the "real America" was very different from what he had seen in movies back home.

He says when he heard the pilot announce that it was "warm" at one degree Celsius, he thought the man was crazy. Collins laughs at that memory.

He says he was even more surprised to learn there were almost no black people in Montana. The state is 92 percent white and five percent Native American. The remaining three percent are listed as "other." He says the realization gave him a lonely feeling, but that he was happy to be with his family again.

Two weeks later, Collins got a job cleaning a local school. He says it is not true when people say refugees do not offer any community service. "I didn't get anything for free," he argues.

Collins believes he and his wife were among the first refugees ever to settle in the Helena area. And soon, he says, he would try to persuade people in Helena that his family was in the country legally.

"Your government accepted us here," he told local people who did not believe them.

Collins has two university degrees and is working on a doctorate. Before his election, he worked as a child protection specialist with Montana's Department of Health and Human Services.

He also told his story in talks at high schools.

Collins believes that, generally, when people hear a person's life story, it can change their mind. Some people realized, "Okay, this guy is just like us," he said.

But, Montana is a traditionally conservative state and not everyone is accepting of Collins or others like him. Collins says this causes him worry, especially considering the state's very permissive gun laws.

"It makes me and my family nervous because... there are crazy people out there, and someone may not want me to do this. Everybody in Montana carries a gun."

Even with those concerns, Collins said he feels ready to begin leading Helena.

"The voters spoke and they said, ‘Hey, you know, with your story and with your experience, it's you we want.'"

As mayor-elect, Collins is excited by the opportunity to "give back" to the community.

"If I can just give back half of what this community gave me, my life is complete, just half. I'll be thankful."

His goals include improvements to the fire department, police department and other emergency services. He also plans to establish low-cost housing for homeless veterans and young people because, he says, years ago, he too was homeless.

Adam Phillips wrote this story for VOA News. Alice Bryant adapted it for Learning English. Caty Weaver was the editor.

refugee – n. someone who has been forced to leave a country because of war or for religious or political reasons

congratulate – v. to tell someone that you are happy because of his or her success or good luck

degree – n. n official document and title that is given to someone who has successfully completed a series of classes at a college or university

veteran – n. someone who fought in a war as a soldier, sailor or some other position