Small Nevada Toad Listed as Endangered Due to Power Project

Update Required To play the media you will need to either update your browser to a recent version or update your Flash plugin.
By Dan Friedell
11 December 2022

But the U.S. government's Fish and Wildlife Service (FWS) says the project will greatly change the area where a very small toad lives. A toad is a small animal that looks like a frog but has dry skin and lives on land.

The Dixie Valley toad lives in a small area about 160 kilometers from Reno, Nevada. It is the only place it is known to exist on Earth. 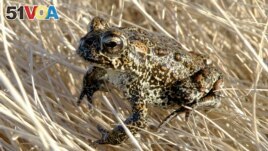 A Dixie Valley toad sits atop grass in Dixie Valley, Nev., on April 6, 2009. The tiny Nevada toad at the center of a legal battle over a geothermal project has officially been declared an endangered species. (Matt Maples/Nevada Department of Wildlife via AP, File)

Because of the power center plans, the FWS in April temporarily moved the toad from its "threatened" list to its "endangered list." Animals on the endangered list are at a much higher risk of going extinct, or no longer existing.

FWS experts do not believe the toad will be able to adapt, or get used to, to the new environment. "These conditions could result in the species no longer persisting," or living, the FWS wrote.

The FWS also noted that the power project will change the conditions too quickly to give the toad a chance to adapt.

An environmental advocacy group called the Center for Biological Diversity said it was pleased with the FWS decision to protect the toad.

Patrick Donnelly is the group's director for the area that includes Nevada. He called the decision an "essential step to prevent the extinction" of a special animal.

Donnelly agreed that clean energy is important in fighting the climate crisis. "But," he said, "it can't come at the cost of extinction."

The power company behind the project is called Ormat Technology. Its original plan called for building two power plants that would produce 60 megawatts of electricity.

In October, Ormat asked the judge to put the case on hold while it developed a new plan to build just one plant that would produce only 12 megawatts of power.

Ormat's Vice President is Paul Thomsen. He said the company's plan to create the power center will "support the fight against climate change" and is in line with U.S. President Joe Biden's plans to create clean energy.

Thomsen said the FWS ruling was not surprising, considering the emergency move to protect the toad last April. He also said the ruling does not change what Ormat is already doing to reduce and avoid possible harmful effects on the toad.

pump –v. to force air or liquid out of something

persist –v. to continue to happen or exist

species –n. a group of animals or plants that are similar

advocacy –n. the act of supporting or asking for something