Update Required To play the media you will need to either update your browser to a recent version or update your Flash plugin.
By John Russell
20 December 2022


Baking Virsa, an eatery in Lahore, Pakistan, is sometimes described as the country's costliest place for what it serves: flatbreads and meats.

The eatery is a small space without windows. Dinners come on plastic plates and diners sit on plastic stools. But Baking Virsa gets visitors from across Pakistan and beyond. Visitors want to learn about the limited offerings, the owner, and the dining experience that sets it apart from other restaurants in the area. 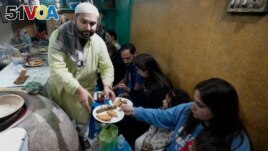 The eatery opens out onto Railway Road in Gawalmandi, an area filled with people, vehicles, animals, and food shops.

Many of Gawalmandi's original communities came from Kashmir and the eastern Punjab area before 1947. That was the year India and Pakistan became independent from the former British Empire. The mix of Hindus, Sikhs and Muslims gave diversity to Gawalmandi's businesses, culture and food.

Some in Lahore used to see Gawalmandi as "virtually a no-go area," said Kamran Lashari, the director-general of the Lahore Walled City Authority. But a makeover more than 20 years ago helped bring in more visitors.

"We had street performers. President Pervez Musharraf sat in the street with people all around him. The prince of Jordan also visited. Indian newspapers reported on Gawalmandi," Lashari said.

Eateries in Gawalmandi are generally not costly.

But then there is Baking Virsa, where dinner for two can quickly come to $60 without drinks because drinks, even water, are not served.

By comparison, a basket of naan at the five-star Serena Hotel in the capital, Islamabad, sells for a dollar and a serving of kebabs is $8. In Gawalmandi, one naan usually costs as little as 10 cents.

The 34-year-old Sufi tells people that his eatery has been in the same place for 75 years. And he has been serving the same items for many years.

Sufi has run Baking Virsa for more than three years, taking over from his father Sufi Masood Saeed, who ran it before him and his grandfather Sufi Ahmed Saeed before that.

He says he is only doing what his father and grandfather have done. He describes his ingredients, cooking methods, and where and how his meat is raised. His sheep are fed special food such as saffron milk, dates and green bananas.

He also tells people how to eat their food. "Pick it up with your hands! Take a big bite! Eat like a beast!" he tells them. A beast is a wild animal that is large or dangerous.

There is no salad, no yogurt, and no chutney, he tells a possible diner on the phone. "And if you ask for these you won't get them," he said.

The meal arrives in a special order. First, Sufi presents a whole chicken, for $30, followed by mutton chops at $12.50, then a kebab, which costs $8. Sufi says one kebab is enough for two people.

Sufi insists on his diners knowing what they eat, where it comes from, how it is made — and "why it tastes so different." And he has no plan to change anything.

Riazat Butt reported on this story for the Associated Press. John Russell adapted it for VOA Learning English.

plate – n. a flat and usually round dish that is used for eating or serving food

stool – n. a seat that fits one person and that has no back or arms

naan – n. a bread that is round, flat, and soft

kebab – n. a dish made by pushing a long, thin stick (called a skewer) through pieces of meat and vegetables and cooking them on a grill

item – n. an individual thing : a separate part or thing

pastry – n. a small, baked food made from pastry

ingredient – n. one of the things that are used to make a food, product, etc

mutton chop – n. a special cut of a mature sheep that is used for food