Small US Colleges Use Course Sharing to Add New Programs

Update Required To play the media you will need to either update your browser to a recent version or update your Flash plugin.
By Andrew Smith
29 October 2022


Dylan Smith is in his second year at Adrian College, a small liberal arts school with about 1,600 students in the state of Michigan.

When Smith was looking at colleges, he liked the small college environment at Adrian. And the school wanted him to join its football and wrestling teams. But Smith did not think a liberal arts education would help him get a job, so he planned to study supply-chain management at Michigan State University, which has nearly 50,000 students. Supply-chain management is a field of study on how to handle the flow of goods and services from raw materials to businesses.

But then Adrian College added supply-chain management to its offerings. That made him change his mind and attend Adrian. 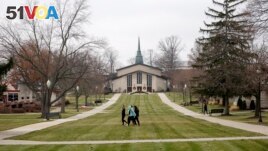 "I couldn't say no to getting the degree I wanted from a smaller school instead of at a big university where you're looking at 200 students in a class," said Smith.

An increasing number of mostly small, liberal arts colleges in the United States are drawing students like Smith by sharing courses online with large universities.

The move is a way for small colleges to deal with decreasing numbers of students going to college. In the past ten years, 81 small, private colleges have closed in the U.S. And nearly two-thirds of high school seniors now say a college degree is not worth the cost. The information comes from a New America and Third Way study.

Rick Ostrander is an assistant to the president at Westmont College in southern California. He said, "Course sharing lets us maintain what we are, which is small and residential, but compete on selection and price."

"Hundreds of schools are going to go out of business if we don't figure this out," said Jeffrey Docking, the president of Adrian College. The school has used course sharing to add 17 fields of study in just the last two years, including computer science, web design, cybersecurity and public health.

Parminder Jassal is head of Unmudl which is developing technology to make it easier for colleges to share courses. She said, "We've been sharing through Airbnb. We're sharing cars. We're sharing everything. Higher education is probably the last place the idea of sharing is finally hitting."

Some employers say liberal arts study develops important skills for the workplace, such as the ability to write well and solve problems. But students and their parents worry that a liberal arts education will not be enough to get the kind of jobs they want.

Getting a good job was the most important reason students gave for going to college, a study by the University of California at Los Angeles' Higher Education Research Institute showed.

A 2021 study by the Federal Reserve found that half of the students who earned bachelor's degrees in liberal arts said they would now choose a different field of study.

Adrian College says new programs that it has added through course sharing brought 100 additional students over the last two years. That is equal to more than $8 million in the total cost over four years of those students' education.

It is also less expensive for a college to pay for course sharing than to hire new professors. For many colleges, developing new programs themselves takes too long and costs too much. The firm EAB estimated that it costs as much as $2.2 million to develop a new study program.

"The way that higher education has always worked is, if I wanted to offer those courses to students, I would have had to go out and hire a faculty member, add those courses and see if students would take them," said Ann Fulop, a vice president at Eureka College in Illinois. The school used course sharing to add a computer science study program this year.

President Docking of Adrian College said, "If we're willing to work together, and share some courses, we can offer many, many more... programs for very little cost."

liberal arts –n. a program of study including a mixture of subjects such as history, philosophy, arts, and languages, as well as the natural sciences

wrestling –n. a sport in which two people compete and try to throw their opponent to the ground and make them stay on the ground.

courses –n. classes of a particular subject taught in schools

seniors –n. students in their fourth year of study in high school or college

residential –adj. having housing for students, such as a dormitory

firm –n. a business or corporation