Smart Farm Equipment to Greatly Reduce Use of Chemicals

Update Required To play the media you will need to either update your browser to a recent version or update your Flash plugin.
By Bryan Lynn
30 May, 2018


Nearly every week, we hear news about the latest successes and failures in driverless vehicles. But we hear little about how other industries are developing this same kind of technology.

One industry heavily involved in researching and developing artificial intelligence, or AI, is agriculture. Companies are experimenting with high-tech tools that can help farmers save time and money, while reducing environment-harming chemicals.

One of the companies is ecoRobotix of Switzerland. It created a robot equipped with AI and cameras to identify all plants on a farm. The robot has four wheels to carry it through the fields in search of weeds. Computer-controlled arms then lower and spray the weeds with small amounts of herbicide.

Company officials say the robot can fully operate on its own for up to 12 hours a day while being powered by the sun. It uses the same kind of sensor and positioning technology used to guide driverless vehicles. A farmer can also control the equipment through a smartphone.

The co-founder of ecoRobotix, Aurelien Demaurex, says the farm robot can kill weeds with 20 times less herbicide than traditional methods. This is because the system uses exactly the right amount of chemical in the exact place required to kill the weeds.

This method led to a huge industry of genetically engineered crop products created to resist herbicides. The process of changing the genetic structure of food crops has been debated for some time. Such foods are commonly called GMOs - for genetically modified organisms, or GEs – meaning genetically edited.

Aurelien Demaurex says the ecoRobotix system can revolutionize farming by greatly reducing chemical usage, while operating without additional equipment or people. The company is planning to bring its robot to the market by early next year.

Another company developing farm robotics is California-based Blue River Technology. The company has a system called "See & Spray," which it claims was the world's first smart sprayer. 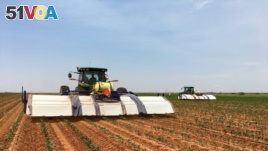 The system – which connects to the back of a tractor – is also equipped with AI to identify and chemically kill only the weeds. It can also spray chemicals on wanted plants to help them grow.

Ben Chostner is the vice president of business development for Blue River Technology. He explains in a company video that See & Spray technology uses the same deep learning methods used in facial recognition.

"The first time we saw a pigweed, the machine didn't know what kind of plant it was. But we taught it - by giving it tens of thousands of examples of that pigweed - and now it's an expert in pigweed."

Chostner adds that the technology gives farmers much more control over the management of their crops. This is because they can get a full picture of exactly what weeds are present to be able to design the best plan for getting rid of them.

The company says its technology can kill the same number of weeds with just 10 percent of the amount of herbicide currently used to spray whole fields.

"With the rig, we have other options open to us. We can spray different chemicals that we were not able to spray before. We can take one man and put him on a tractor and we can do the work or 8 to 10 people."

But Bayer is also one of the world's largest seeds and pesticides producers. Economic experts say Bayer's deal with Bosch is aimed at preparing the business for major reductions in herbicide sales when new "smart agriculture" solutions are widely used.

weed – n. plant that tends to grow where not wanted and to prevent the growth of more desirable plants usually by taking up space

spray – v. to put a stream of small drops of liquid on something

tractor – n. motor vehicle with large back wheels and thick tires used on farms for pulling heavy loads and machinery

rig – n. piece of equipment or machinery used for a particular purpose

option – n. the chance or ability to choose something or to choose between two or more things