Update Required To play the media you will need to either update your browser to a recent version or update your Flash plugin.
By Bryan Lynn
18 April, 2018


Artificial intelligence (AI) has arrived on the farm.

A Dutch company has developed technology to follow the movements and activities of cows. The high-tech system, powered by AI and motion sensors, is called "The Intelligent Dairy Farmer's Assistant."

The company, Connecterra, launched the system in the United States in December 2017 after several years of testing and operations in Europe.

A device is put around the neck of the cow to record its movements. This information is then processed by a computer that uses AI to learn about the animal's behavior over time.

The system can tell farmers what the cow is doing in real time.

This information can help predict when cattle get sick, become less productive or are ready for mating.

Richard Watson owns the Seven Oaks Dairy in Waynesboro, Georgia. He was one of the first American farmers to use the high-tech system.

Watson said the system is a big help because it is impossible for farmers to keep up with the activities of each cow individually.

In this undated photo provided by Google, a person uses a phone to monitor a cow's IDA, or "The Intelligent Dairy Farmer's Assistant," device in a pasture on Seven Oaks Dairy in Waynesboro, Ga. (Ben Sellon/Google via AP)

He added that having a computer identify which of his 2,000 cattle need attention could help improve farm productivity by up to 10 percent. He estimates this difference could greatly increase his profits.

"Just a 10 percent or five percent increase, or improvement in productivity, means hundreds of thousands of dollars to us, aside from the fact that we just want happier and healthier and more welfare in our animals, anyway."

Watson says he sees the technology being used in many large farming systems if it continues to be successful over time.

The founder and head of Connecterra is Yasir Khokhar. He says the idea for the system came while he was living on a dairy farm south of Amsterdam.

"It turns out the technology farmers use is really outdated in many respects," Khokhar told the Associated Press. He added that most of the technology that does exist is difficult to use. He says modern agriculture greatly needs new technology like this.

The company says information about the cows can be collected and seen on a cellphone or other mobile device. A text message can also inform farmers of concerns involving the animals.

Some American farmers are using other sensor equipment to receive messages about their cows.

Moocall, a business based in Ireland, says its products can send farmers a text message when their cows are ready to give birth. A device put on the cow's tail measures the number of contractions to predict the most likely time of birth. 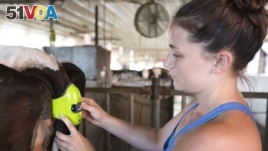 The company also sells a product called Moocall HEAT. It says this device uses temperature sensors to predict the exact time a female is in heat, the time that she is ready for mating.

Mary Mackinson Faber is a fifth-generation farmer who lives near Pontiac, Illinois. She said such devices could be great tools to inform farmers about the condition of their cows before problems happen.

"That if a cow is calving it will shoot us a text, and we can – you know – come out here and check on it."

Faber added that while the technology is a very useful tool, she believes it will always take more than machines to do what is right for the animals.

"There are certain tasks that it can help with, and it can assist us, but I don't think it will ever replace the human."

Ryan Nakashima reported this story for the Associated Press. Bryan Lynn adapted it for VOA Learning English. George Grow was the editor.

artificial intelligence – n. the ability of a machine to reproduce human behavior

ruminate – v. to bring up and chew again what was already chewed and swallowed

welfare – n. the state of being happy and healthy

outdated – adj. no longer useful or acceptable: not modern or current

contraction – n. a strong, painful movement of muscles experienced during the birthing process

task – n. a piece of work given to someone