Where Are the Best Educated Americans?

Update Required To play the media you will need to either update your browser to a recent version or update your Flash plugin.
By Jim Dresbach
15 February, 2016


The best educated Americans live mainly in the northeastern United States or in California, a new study finds.

It found that 40 percent of adults in Massachusetts have at least a bachelor's degree. They completed a four-year study program at a college or university. Just three percent of Massachusetts high school students withdrew from school before finishing their studies. 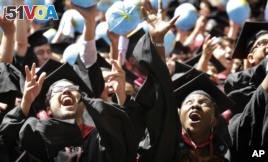 Students celebrate after graduating from Harvard University on May 28, 2015, in Cambridge, Massachusetts. The commonwealth has been named the smartest state in the United States.

California finished in 10th place on the rankings.

Mississippi was ranked at the bottom of the list. Just 20 percent of adults there went to college. Other states near the bottom were Louisiana, Nevada, Oklahoma and Arkansas.

Zippia used information from the U.S. Census Bureau to decide the rankings. The company used college graduation rates and high school dropout rates from around the country. It did not use information about college entrance exams or intelligence tests.

Zippia says there are good reasons for developing ratings of the most educated states.

"One of the many qualities that people look for in a potential location or company is the intelligence of those around them," the report said. "So finding a state with an intelligent population makes sense for both companies and employees."

In 2014, Forbes magazine named Boston, Massachusetts, as the smartest city in America. At the time, over 44 percent of adults living in Boston earned a college degree.

Dora Mekouar reported on this story for VOANews. Jim Dresbach adapted her report for Learning English. George Grow was the editor.

Where do you think the smartest region of your country is located? We want to hear from you. Write to us in the Comments Section or visit our 51VOA.COM.

dropout – n. a person who stops going to a school or college before finishing

ranking – n. a list of things that are ordered according to their quality, ability or size