Update Required To play the media you will need to either update your browser to a recent version or update your Flash plugin.
By Jonathan Evans
25 September, 2014


A new computer program is being praised as a life-changer for blind people. The new program is known as the KNFB Reader app. It can help users listen to an audio read-back -- the sound -- of printed material.

Blind people say the KNFB Reader app will make life much easier. They say it will help with everything from reading restaurant menus to studying papers in the classroom.

The application software program costs $99. It is the product of a long relationship between the National Federation of the Blind and Ray Kurzweil. He is a computer scientist and an employee of Google, which specializes in Internet-related services. 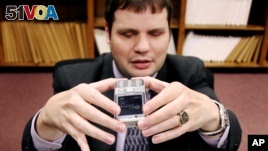 The Google website says the technical development of the app resulted from the work of K-NFB Reading Technology Incorporated and Sensotec NV, a company in Belgium.

Ray Kurzweil demonstrated the app at the National Federation of the Blind's yearly meeting in June.

The KNFB Reader makes use of new pattern recognition and image-processing technology, and new hardware for smartphones. People using the app can adjust, or change the position, of the camera and read printed materials out loud.

Users say the app has given some people greater independence. The Reuters news service says they made the comments on social media sites such as Twitter. One user, named Gordon Luke, reported that he was able to use the app to read his voting card for the recent referendum in Scotland.

Ray Kurzweil told Reuters that the app will be available for Android mobile devices in the coming months. He said he may also build a version of the app for Google Glass. Google Glass is a small computer screen that can be connected to eyeglasses. It is able to take photographs, record video and play sound.

Ray Kurzweil added that "Google Glass makes sense because you direct the camera with your head."

Mr. Kurzweil started working on what he called "reading machines" in the early 1970s. The idea came after speaking with a blind person who expressed frustration with the lack of technology to assist blind people.

Mr. Kurzweil's first reading machine was the size of a washing machine. It cost $50,000.

The technology has continued to improve over the past 20 years. The new smartphone app can recognize and take printed material in one language and change it to another language. But it was not available on a mobile device until now. In the past, it cost more than $1,000 to use the software app with a camera and a mobile phone.

The release of the KNFB Reader app comes at a time when the technology industry is facing criticism. Critics say the industry is too concerned about making software programs for sharing photos and video games.

In San Francisco, activists have blocked buses operated by companies such as Google and Apple. They also have protested near the homes of some technology company executives. They say these business leaders are increasing the cost of living and not doing enough to help fix the problems of San Francisco.

Bryan Bashin leads the non-profit group Lighthouse for the Blind and Visually Impaired in San Francisco. He is also blind. He says the KNFB app shows the positive impact that technology can have. He says there are times in his life when he wishes the KNFB app were available to him. He adds that the ability to gain information quickly with something that fits in your pocket at a fast speed will be, what he calls, "a game changer."

independence – n. freedom from outside control or support

frustrations – n. things that cause feelings of anger or annoyance

referendum – n. a public vote on an issue

Now it’s your turn to use these Words in this Story. In the comments section, write a sentence using one of these words and we will provide feedback on the use of vocabulary and grammar.