Update Required To play the media you will need to either update your browser to a recent version or update your Flash plugin.
By Dan Friedell
01 August, 2016

A rare flower, called the titan arum, is about to blossom at the U.S. Botanic Garden. Unlike most flowers though, it is very smelly.

Some people say the smell is like rotting flesh or a dead body. That is why the flower is sometimes called a corpse flower. Corpse is a term for a dead body.

The flower comes from Indonesia where the tropical climate is warm most of the time. Washington, D.C., is warm in the summer, but it is too cold for the plant to survive outside during the winter.

So the plant lives indoors in a greenhouse, where the temperature can be controlled and it is warm and humid year-round. 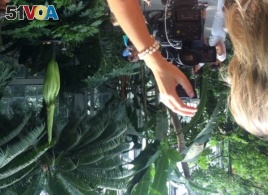 A journalist takes a photo of the titan arum, a smelly plant about to blossom in Washington, D.C.

The plant does not produce flowers each year. Once it blossoms, it may not bloom again for a number of years. The flower is actually a collection of a hundreds of small flowers working together.

The titan arum produces its strong smell to attract insects. The insects help pollinate the flower and make sure the titan arum can produce the next generation. The bad smell only lasts about two days. After that, the plant goes dormant again.

The U.S. Botanic Garden has shown five other titan arums since 2003. This is the first time the six-year-old plant has blossomed, and people are excited.

The garden is open to visitors longer than usual each day so people can see the flower. It is supposed to be smelliest at night.

There is also a live webcam so people can check the status of the plant.

Last week, the same kind of plant bloomed at a garden in New York City. Many people posted videos and photos on Facebook and Twitter.

The one in New York opened on Friday. By Monday, it was not smelly anymore.

Have you ever seen a plant like this? How did it smell? Write to us in the Comments Section or on 51VOA.COM.

flesh – n. the soft parts of the body of an animal or person

greenhouse – n. a building or part of a building that has glass walls and a glass roof and that is used for growing plants

bloom –v. the opening of a flower from a bud

pollinate – v. to give (a plant) pollen from another plant of the same kind so that seeds will be produced

dormant – adj. not doing anything at this time : not active but able to become active