Update Required To play the media you will need to either update your browser to a recent version or update your Flash plugin.
By Dan Novak
17 November 2021


The Indian capital of New Delhi is covered with dangerous smog. The situation has closed schools and forced officials to consider declaring a lockdown -- a stay-at-home order.

Pollution in New Delhi has reached severe levels on several days this month. Officials have ordered schools and colleges to close and ordered people to work from home in an effort to control the pollution. Six power plants in the city were also ordered to close temporarily. 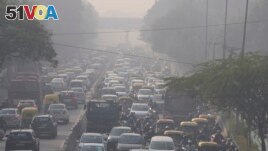 The federal government has also banned construction until the end of the week. It has also barred trucks from entering the city, except those carrying important items.

Environmental experts note that these steps would only partly help the air pollution crisis that troubles New Delhi every winter.

"The emergency action is not a magic bullet that will address the pollution crisis," said Anumita Roychowdhury. She is with the New Delhi's Center for Science and Environment. The steps "will not worsen the pollution but it will not clean the air," Roychowdhury added.

New Delhi is the world's most polluted capital city. It has recorded levels for dangerous particles, known as PM 2.5, many times higher than normal levels. PM 2.5 is an air pollutant that is damaging to the lungs in high levels.

The smog that covers the city is a mix of pollutants, including car emissions, industrial pollution, dust from building projects, farm fires and pollution caused by trash burning. In winter, the pollutants hang over the city because of low wind speeds.

City officials in New Delhi told the Supreme Court they are considering a weekend lockdown, similar to what happened during severe periods of the COVID-19 pandemic. If that happens, it would be the city's first pollution-related lockdown.

The unhealthy smog is not only in the capital city. The air across much of North India also turns gray at this time of the year.

Delhi has taken some steps to fight the pollution, from shutting down coal power plants to changing most industry and public transportation to clean fuel. But nearby states have not taken the same reforms.

"Air does not respect political boundaries," Roychowdhury said. She added that the time has come to take a more widespread approach to fighting the problem.

However, discontinuing coal will not be easy. Coal still powers 70 percent of India's electricity system. Indian officials who attended the United Nations climate talks in Scotland said developing countries should be able to responsibly use fossil fuels.

"How can anyone expect that developing countries can make promises about phasing out coal and fossil fuel subsidies?" Environment Minister Bhupender Yadav asked at the meeting.

India and China were criticized for weakening a promise among countries at the meeting to start discontinuing coal.

But in India, environmentalists said, the country's concerns were real.

"While coal does contribute to air pollution and climate change, we cannot shut down coal right away and replace it with renewables in a hurry," said Chandra Bhushan. She leads the Delhi-based International Forum for Environment.

For now, the severe air pollution has led to a public health emergency. Many people in New Delhi and other North Indian cities are struggling with breathing problems.

Research by the Energy Policy Institute at the University of Chicago found that the dirty air kills more than one million people every year in India.

Anjana Pasricha reported this story for Voice of America. Dan Novak adapted it for VOA Learning English. Ashley Thompson was the editor.

smog — n. fog mixed with smoke : a cloud of dirty air from cars, factories, etc., that is usually found in cities

magic bullet — n. something that solves a difficult problem easily

address — v. to give attention to something)

particle — n. a very small piece of something

emission — n. the act of producing or sending out something (such as energy or gas) from a source

approach — n. a way of doing or thinking about something

fossil fuel — n. a fuel such as coal, oil, or natural gas that is formed in the earth from dead plants or animals

phase out — v. to stop something gradually over a period of time in a planned series of steps or phases

subsidy — n. money that is paid usually by a government to keep the price of a product or service low or to help a business or organization to continue to function

contribute — v. to help to cause something to happen