Update Required To play the media you will need to either update your browser to a recent version or update your Flash plugin.
By Pete Musto
19 January 2020


Increasingly intense wildfires are burning forests across Australia and the western United States. They are fueling concern among locals and health professionals about the long-term health effects of smoke exposure.

The flames came first. Then came smoke-- from the surrounding forest and from the thousands of homes that burned. A thick cloud of smoke surrounded parts of the area for weeks. It left Norton struggling to breathe. 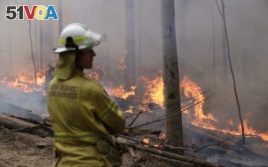 A firefighter keeps an eye on a controlled fire as they work at building a containment line at a wildfire near Bodalla, Australia, Sunday, Jan. 12, 2020.

Norton, a 30-year-old nurse, has dealt with respiratory infections that reduce her strength. Work has become difficult. She worries about future health problems she may have.

"I don't want to have cancer in my 50s because I inhaled smoke in my 30s," Norton told the Associated Press.

The immediate effects of the November 2018 fire that tore through Paradise are well known. But little is known about the long-term effect of intense smoke exposure.

The risks are far-reaching. Climate change is making some parts of the world drier. Drier environments are more likely to experience fires. The fires send up smoke clouds that can travel thousands of kilometers, affecting millions of people.

Hundreds of fires are currently burning across Australia. They began burning in September. Smoke from the fires has spread across more than 20 million square kilometers. The United Nations weather agency and the Copernicus Atmospheric Monitoring Service reported the smoke has moved across the Pacific Ocean, reaching South America.

The fires in Australia have destroyed more than 2,000 homes and killed at least 26 people. Officials have ordered several evacuations in New South Wales and the neighboring state of Victoria. Both states also issued hazardous air quality warnings for affected areas. Officials said people with health problems should consider moving somewhere else until the smoke clears.

Every year, an estimated 20,000 people die sooner than expected in the United States because of continuous wildfire smoke exposure. Scientists expect that number to double in the next 100 years.

The California National Primate Research Center is carrying out one of the few long-term health studies on wildfire smoke exposure. They are studying the effects the smoke can have on monkeys. For the study, they looked at the lungs of 50 rhesus monkeys. The monkeys were living in outdoor pens year-round.

In 2008, they were exposed to a long period of wildfire smoke. The monkeys were babies at the time. They went on to develop lungs 20 percent smaller than another group of monkeys born a year later, researchers found.

The center's associate director of research, Lisa Miller, said of the study, "It's the closest animal model to replicate what happens with kids."

These studies have shown notably higher rates of lung cancer and death from heart disease among the firefighters, said Michael Kleinman. He researches the health effects of air pollution and is a professor of environmental toxicology at the University of California, Irvine.

Firefighters get hit with smoke much more often and at much higher levels. But Kleinman said a small increase in illnesses could be expected among people who have been exposed to wildfire smoke across California and the West.

The cycle of sickness

Kelsey Norton remembers fleeing Paradise with her boyfriend. It was the morning of November 8, 2018. She said the smoke was so thick "it was like midnight."

A few days later, she went back to work at a hospital in Chico, about 24 kilometers from Paradise. But smoke from the still-burning wildfire had made it inside the hospital itself.

There was not enough face protection to go around. So, Norton says, she went without any protection for several days.

At first, she felt just a little out of breath, But two weeks later, she developed a respiratory infection. Her body temperature was high and she had severe congestion.

When she finally got better, she got sick again. And then again. She has had eight or nine respiratory infections in the past year.

She said, "I just want to break this cycle of sickness."

Norton is one of about 9,000 people taking part in a study on smoke exposure in Paradise and other California communities. The work is led by researchers at the University of California, Davis.

The researchers plan to study the long-term health of a small number of those 9,000 people in the coming years. They are also working with the primate center to see if the effects seen in the young monkeys are at all similar to those seen in young humans.

The wildfires in Australia and the western U.S. have burned thousands of homes and other structures -- not just wood from trees. This adds to the health risks, experts say. Building materials and household items made from petroleum-based plastics burn hotter and generate smoke that is more poisonous.

Nicholas Kenyon is a researcher involved in the effort. He said identifying the health effects of smoke is increasingly urgent.

"We've got the population affected right now, but ... this is going to be the entire West," Kenyon said. "Nobody's been really inhaling this kind of stuff from structures until now."

Pete Musto adapted it for VOA Learning English. Ashley Thompson was the editor. Write to us in the Comments Section or on 51VOA.COM.

evacuation(s) – n. the act of forcing someone to leave a dangerous place

replicate – v. to repeat or copy something exactly

toxicology – n. the study of poisonous chemicals and drugs and how a person or other living thing reacts to them

congestion – n. the condition of having ones respiratory system blocked with fluid such as blood or mucus

cycle – n. a repeating series of events or actions