For Smokers, Never Too Late to Quit; Diesel and Cancer

Update Required To play the media you will need to either update your browser to a recent version or update your Flash plugin.
By VOA
19 June, 2012

There is new medical evidence for the expression "better late than never." Researchers have found that smokers reduce their risk of dying from tobacco even if they stop smoking after the age of sixty.

Smoking is a known risk for many diseases, including many forms of cancer as well as heart disease. But most studies on the health effects of smoking involve middle-aged people. 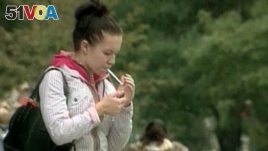 Tobacco kills about six million people each year throughout the world
The latest analysis by German researchers examined the findings of seventeen studies carried out in the United States, China, Australia, Japan, England, Spain and France.

Smokers sixty and older had an eighty-three percent increased risk of dying from all causes compared to people who had never smoked. Smokers also had a thirty-four percent higher risk of death compared to former smokers.

T.H. Lam is professor in the school of public health at the University of Hong Kong. He says people who continue to smoke as seniors have at least a fifty percent chance of dying from their smoking habit.

T.H. LAM: "And if they stop smoking, then they can reduce about one-quarter of their excess risk. So this is good news that older people should not continue to smoke."

What about smokers who start at a young age and stop when they are in their thirties? Dr. Lam says they can reduce their risk of dying from a smoking-related illness to almost the same level as someone who never smoked. Even people who never smoke can still die from breathing other people's secondhand smoke.

An article on smoking among older individuals, with a commentary by T.H. Lam, appeared in the Archives of Internal Medicine.

In other news, the World Health Organization now says diesel fuel exhaust causes cancer. Since nineteen eighty-eight the WHO had rated exhaust from diesel engines as "probably carcinogenic" to humans. Now, it compares the risk to that of secondhand cigarette smoke.

This month's announcement came after international experts spent a week reviewing new research findings. Those included a long-term study of more than twelve thousand miners who were heavily exposed to diesel exhaust.

The diesel industry pointed out that the mining study lacked exact data on exposure levels during its early years. Also, diesel engine makers point to their new designs that produce far less emissions than older truck and bus engines.

The WHO says stronger standards are needed to limit diesel emissions into the air.

The United States Environmental Protection Agency continues to rate diesel as only a "likely" cause of cancer.