Update Required To play the media you will need to either update your browser to a recent version or update your Flash plugin.
By Dan Friedell
26 July, 2017

A man in Los Angeles was arrested on Tuesday for illegally bringing Asian reptiles, including three king cobra snakes, into the United States.

The snakes were hidden inside cans of potato chips. 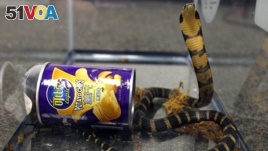 A king cobra was hidden in a potato chip can. It was sent from Hong Kong to the U.S.

In March, U.S. Customs and Border Protection agents found a package from Hong Kong that contained the three snakes as well as three turtles.

The agents thought there might be illegal drugs inside the potato chip cans. They were surprised to see something moving inside when they opened them. The snakes were about half a meter long.

The turtles were albino Chinese soft-shelled turtles. The International Union for Conservation of Nature considers the turtles "vulnerable."

Government agents took the cobras, but permitted the turtles to be delivered to the home of Rodrigo Franco.

Agents later got permission to search Franco's home. Inside, they found a lot of rare reptiles, including a crocodile and more species of turtles.

Government lawyers say all of the animals are protected under U.S. law.

The agents found a cell phone with messages from a person in Hong Kong. In one of the messages, Franco asked the person what he should feed the cobra snakes.

The answer? Other snakes.

Cobras live in the rainforests and flat lands of India, China and Southeast Asia. They have some of the most dangerous poison in the world.

Franco told government agents he received 20 more snakes, but they had all died. Agents do not believe him, however, based on messages they found on his phone.

Of the cobras found in the potato chip cans, two survived. They are now being cared for at a zoo.

The story was a trending topic on social media Wednesday. One person on Twitter wanted to know how you could get a large snake to coil up inside a small can.

One Twitter user compared the experience of opening a can and finding a snake to the surprise of opening and reading his emails.

Franco has been charged with illegally importing merchandise. If found guilty, he could spend up to 20 years in prison.

Dan Friedell wrote this story for VOA Learning English based on reports by the Associated Press and Washington Post. Ashley Thompson was the editor.

What would you do if you received a snake in a can? We want to know. Write to us in the Comments Section or on 51VOA.COM.

warrant – n. a document issued by a court that gives the police the power to do something

coil – v. to wind (something) into circles

agent – n. person who does business for another person : a person who acts on behalf of another

merchandise – n. goods that are bought and sold