Soap Invented by Indian Women May Save Lives

Update Required To play the media you will need to either update your browser to a recent version or update your Flash plugin.
By Anna Matteo
27 October, 2018


One of the easiest ways to stop the spread of disease is to simply wash your hands. Twenty seconds of handwashing with soap and water can reduce illnesses and save lives.

But, many people, especially children, do not have good handwashing habits. One problem is that children do not wash their hands often enough or long enough. Children may think that it is a tiresome thing to do.

To help solve this problem, two entrepreneurs from India created a product to turn handwashing into a fun activity.

"It's such a simple habit to do, and the fact that people aren't doing it, and it's resulting in actual deaths -- which is shocking. So, we decided on coming up with a fun solution."

"SoaPen is a soap that kids can draw with. It's a fun way to teach kids how to wash their hands."

As the name suggests, the SoaPen is a pen made out of soap. The children draw on their hands with the soap pen and then wash it off. If they do not spend enough time washing it off, the colors remain on the child's hands.

Issar said it ensures that children take enough time to wash their hands. This may be especially helpful in a classroom. Often a teacher does not have the time to ensure that each child has washed their hands properly. 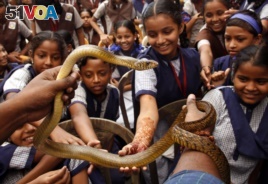 Many germs are spread at school. So, it is important to teach kids good handwashing habits. These school children in Mumbai, India, will most likely wash their hands after handling a snake. (File Photo 2015.)

From an idea to an actual product

Issar and Anand studied design together in New York City. They created the soap after a visit home to India.

To get their product on the market, the two women applied for a spot at a business development program in Washington, D.C. called Halcyon Incubator.

Mike Malloy is the program manager at Halycon Incubator. He said turning a great idea into a product that can help others is not easy.

Real rollercoasters take you up and down very quickly. The same can be said about rollercoasters in our daily lives -- events that give us great highs and terrible lows..

Halcyon connects what it calls "social entrepreneurs" with business professionals. These experts help the entrepreneurs sell their products. Anand said that with this business help, they were able to do more than they would have by themselves.

"Without an incubator like Halcyon, I don't think we would be able to make or envision social impact as greatly as we are able to right now."

Anand and Issar said their goal is to donate one SoaPen to children in poverty for every three they sell at full price.

The product could have a real effect on public health. The United Nations children's agency, UNICEF, reports that 1.5 million children die each year as a result of diarrhea. UNICEF says good handwashing could reduce that number by 40 percent.

Are you washing your hands properly?

Children may not be the only ones who need to improve their handwashing. If you are not soaping up your hands for at least 20 seconds, you are probably not removing all of the germs.

In celebration of World Handwashing Day, which was October 15, experts at the WHO remind us how to wash our hands properly.

The CDC also reminds us that if soap and water are not available, use an alcohol-based hand sanitizer that contains at least 60% alcohol.

However, these alcohol-based hand sanitizers do not kill some germs. And often they do not remove harmful chemicals from the skin. Also, overusing these products may increase germs' resistance to them.

So, if available, washing with soap and water is best.

Arash Arabasadi reported this story for VOA News in Washington, D.C. Anna Matteo adapted it for Learning English and added additional information from the CDC website. Mario Ritter was the editor.

entrepreneur – n. one who organizes, manages, and assumes the risks of a business or enterprise

proper – adj. behaving in a way that is correct according to social or moral rules : in a complete way

rollercoaster – n. an elevated railway (as in an amusement park) constructed with sharp curves and steep inclines on which cars roll : roller-coaster – adj. something resembling a roller coaster especially : marked by numerous ups and downs : behavior, events, or experiences characterized by sudden and extreme changes

envision – v. to picture to oneself

lather – v. a foam or froth formed when a detergent (such as soap) is agitated in water

rinse – v. to cleanse (as of soap) by clear water