Update Required To play the media you will need to either update your browser to a recent version or update your Flash plugin.
By VOA
08 June, 2019

On this program we talk about common expressions in American English. And on today's show we will talk about a very common household object. People used it thousands of years ago and most likely you used it today. I am talking about soap.

Today there are many different types of soap – from bars to liquid, from scented to plain. There are soaps to clean our bodies, our pets, our cars and our homes.

Advertising for these products is big business. In fact, it is this connection to advertising that has given us the name of a very popular form of entertainment – soap operas. 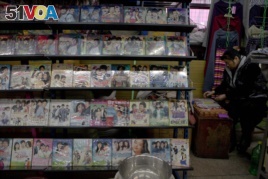 A Chinese woman plays a card games near South Korean soap operas DVDs on sale at a shop in Yanji, in Jilin province, Dec. 7, 2012.

Many years ago (in the U.S.), they were the first programs to be paid for by soap-making companies. Companies that made soaps, detergents and other cleaning products originally broadcast their commercials during these shows. And who was mainly watching these daytime shows?

So, these commercials were aimed at women who may have been cleaning their homes while watching the television program.

So, that is where the "soap" part of the name "soap opera" comes from. But what about "opera"? Why not call them "soap shows"?

Well, in soap operas, the human stories that play out are extreme. The characters and situations of the shows are over-the-top! They probably would not happen in real life. In fact, that is why many people criticize or make fun of soaps. They are too unrealistic.

But who cares?! Not the people who love soap operas, that's for sure.

People do not watch soap operas to see real life or to learn valuable lessons. Soap operas are escapist entertainment. You get to escape your own life and live dangerously in someone else's ... for about an hour at a time.

As you may have noticed during this program, we often call soap operas just "soaps," as in, "Don't bother Felicia right now. She is catching up on all her soaps."

Now, some people may not want to admit that they enjoy watching such a show. For this reason, some people call soap operas their "guilty pleasure."

Guilty pleasures appeal to our secret desires, the ones we do not like to publicly share. You watch something, enjoy it ... and then feel a little guilty afterward.

People who watch soap operas – either daytime or nighttime soaps – are usually very loyal followers. In fact, it is this audience loyalty that appealed to advertisers in the first place.

"Tune in next week!"

And you do tune in next week. You can't wait to find out what happens! That is how a soap opera gets you hooked.

... next week on Words and Their Stories.

"As now for the next 30 minutes, "As the World Turns" brought to you by Ivory soap. Ninety-nine and forty-forty to 100 percent pure. It floats.!"

(1960 opening for the television soap opera "As the World Turns.)

soap – n. a substance that is used for washing something

tablet – n. a flat piece of stone, clay, or wood that has writing on it

scented – adj. having a perfumed smell

detergent – n. a powder or liquid that is used to clean clothes, dishes, etc. : a chemical substance that is like soap

character – n. a person in a story or play

over-the-top – informal : going beyond what is expected, usual, normal, or appropriate

addictive – adj. very enjoyable in a way that makes you want to do or have something again

cliffhanger – n. a story, contest, or situation that is very exciting because what is going to happen next is not known

hooked on – idiomatic expression : very interested and enthusiastic about (something)