Update Required To play the media you will need to either update your browser to a recent version or update your Flash plugin.
By Bryan Lynn
22 March, 2019


A California city has been caught unprepared by people coming to experience a colorful "super bloom" of desert flowers.

We reported last week on this rare event happening in areas around southern California's Anza-Borrego Desert State Park. The park sits about 250 kilometers southeast of Los Angeles. The area is usually a dry desert.

A super bloom is when huge amounts of desert flowers open, or bloom, at the same time. This year's happening came after heavy rainfall during the winter. The rainy period was followed by warm, sunny conditions at the start of spring. 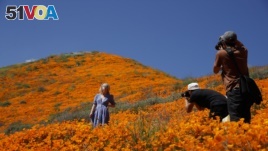 In the past, super blooms have only happened about once every 10 years. But this year's event marked California's second super bloom in just two years.

Large bursts of colorful blooms have also covered hillside areas and areas along roads in several communities. One such community is Lake Elsinore, a small city about 110 kilometers from Los Angeles.

Lake Elsinore has a population of about 60,000. Local officials say the super bloom has brought up to 50,000 people per day to the hillsides around the city.

One reason for the huge crowds is that so many people are sharing their pictures of the super bloom on social media. In fact, the hashtag #superbloom has been used more than 100,000 times on Instagram. Pictures are also being shared widely on Twitter and Facebook.

In the past two weeks, many super bloom fans came to Lake Elsinore to follow a hiking path through the local hillsides. The tens of thousands of visitors have caused problems for people who live and work in the area.

The most serious problems have involved traffic. Local officials say the large crowds have made it difficult or even impossible for some local people to leave their homes.

Nicole Dailey is a spokeswoman for the city of Lake Elsinore. She told Reuters that, this year, the area saw a large increase in both blooming flowers and the number of visitors. "We did not expect the crowds that we saw," Dailey said. "Our freeways and our cities are not designed for crowds that you see in Los Angeles."

At one point last weekend, officials decided to close the hillside trail in Lake Elsinore to stop the flood of people. The city sought help from state and local police agencies to help deal with the traffic around the hillsides, where no public parking exists.

The mayor of Lake Elsinore, Steve Manos, wrote on Facebook Saturday that a city employee was struck by a hit-and-run driver in the area. He also said a visitor to the area was bitten by a rattlesnake. Manos told the Associated Press that the situation had been "insane," even describing it as a "poppy apocalypse."

Bryan Lynn wrote this story, based on reports from the Associated Press, Reuters and online sources. Ashley Thompson was the editor.

apocalypse – n. a great disaster or event that causes much fear, loss, or destruction