Update Required To play the media you will need to either update your browser to a recent version or update your Flash plugin.
By Caty Weaver
27 May 2020


The last time musician Jon Jones performed in public with his group Eli Young Band was March 8. The spread of COVID-19 in the United States forced a halt to the large crowds that gather for music shows.

But, now Eli Young Band has a possible work-around. 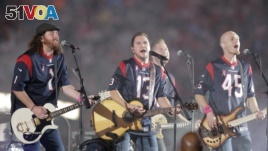 FILE - This Oct. 9, 2014 file photo shows The Eli Young Band performing during halftime of an NFL football game in Houston. The band will perform as part of the Concert in Your Car series at the new Texas Rangers stadium in Arlington, Texas starting June June 4. (AP Photo)

In June, it plans to perform live once again with a "drive-in" series of shows at the Texas Rangers' new baseball stadium in Arlington.

"This is going to be a surreal kind of setting," Jones said.

About 400 cars full of people are expected to attend the show. Audience members will be required to stay in their vehicles as the artists perform.

As states start to reopen businesses, music industry organizers are testing out new models of smaller, socially distant concerts. Jones is hopeful that drive-in concerts might help widen the path toward a restart of traditional shows.

The four-night series called Concert in Your Car is set to open June 4. Tickets to the event sold quickly.

Band manager George Couri set up the series in partnership with the Rangers baseball team.

"It's about creating an experience for live music again," said Couri. "The big driver for me is to prove it can work. It would give people hope that this can be repeated again and again in many different places."

The drive-in concert idea has been tried before. American music star Keith Urban performed at a drive-in theater in Tennessee last week. He used a smaller crew than usual and production elements were limited. But, Urban suggests the industry will expand on the current drive-in concert model.

"The stage is going to be coming out to the parking lot and people will be staying in their cars," said Urban.

Concert organizer Live Nation is planning to test fanless concerts, drive-in concerts and "reduced capacity shows" says President and CEO Michael Rapino. He spoke about the idea on a teleconference call with investors.

Tailgate Fest in California had already proved before the pandemic that car-centered concerts could be successful. The country music event where fans are encouraged to watch from their trucks, cars and other vehicles is going into its third year this August.

Tailgate Fest's leader Melissa Carbone says a lot of changes are coming to the event because of the coronavirus, including the cancellation of some gatherings. But music stars Dierks Bentley and the groups Lynyrd Skynyrd and TLC still plan to perform.

"...Nobody wants to see live music go away," said Carbone.

For most bands, live shows are a major money-maker. But Couri said the launch of the drive-in concerts at the Texas stadium will see more limited earnings.

The fee for admission is $40 a car. No food or goods will be available for sale. All bands will play acoustically so as to reduce production workers. And attendees will listen to the music over their car radios.

Jon Jones of Eli Young Band says the group is not doing the drive-in concert to make up lost earnings only. He said the band also wants to give music back to the fans.

"I think people need something safe that they can go do and if we can be that," Jones said, "that's awesome."

The Associated Press reported this story. Caty Weaver adapted it for Learning English. Hai Do was the editor.

work-around -n. a plan or method to avoid a problem that is blocking an action

stadium -n. a very large usually roofless building that has a large open area surrounded by many rows of seats and that is used for sports events, concerts, etc.

capacity -n. the ability to hold or contain people or things — usually singular

encourage -v. to make (someone) more likely to do something

acoustic -adv. of a musical instrument: not having its sound changed by electrical devices