Update Required To play the media you will need to either update your browser to a recent version or update your Flash plugin.
By Dan Friedell
18 November, 2015


The Islamic State militant group claimed that they crashed the Russian airplane over Egypt in late October with a bomb made from a soda can.

The group published a photo in the newest edition of its online magazine Dabiq.

The photo shows a gold Schweppes soda can and what appears to be a switch to trigger a bomb. But officials cannot verify whether the claim is authentic. 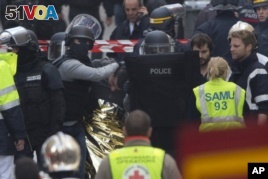 Hooded police officers detain a man in Saint-Denis, near Paris, after a raid on an apartment where the suspected mastermind of last week's terror attacks in the French capital was believed to have been holed up, Nov. 18, 2015.

Russian officials said on Tuesday a bomb blew up the plane traveling from Sharm el-Sheikh to St. Petersburg. The crash killed 224 people.

French officers raided an apartment in Saint-Denis, a suburb north of Paris, on Wednesday morning. They were looking for suspects involved in the terrorist attacks that killed 129 people last Friday night. The news grabbed social media channels.

Eight people were captured and two killed during the raid, which took place before dawn in Paris.

People magazine covers celebrities and pop culture in the United States. One of its most popular issues each year names "the sexiest man alive."

In the past, some of the winners were actors George Clooney, Bradley Cooper and Channing Tatum. This year, retired soccer star David Beckham earned the crown.

Beckham was a key member of England's national soccer team in the 1990s. He mostly played for Manchester United and Real Madrid before finishing his career in the U.S. He's also married to former Spice Girls singer Victoria Adams – who was known as "Posh Spice."

In more somber news, another star athlete from the 1990s passed away. Jonah Lomu was a legendary try-scorer for New Zealand's world-famous All Blacks rugby team from 1994-2002. He was only 40, and many of his former teammates and opponents reached out on Twitter to offer their condolences.

What do you think about the claim that a bomb was made from a soda can and it downed the Russian plane? We want to hear from you. Write to us in the Comments Section or on our Facebook page.

verify – v. to prove, show, find out, or state that (something) is true or correct