Update Required To play the media you will need to either update your browser to a recent version or update your Flash plugin.
By Alice Bryant
20 December, 2016


In many parts of Africa, communities have electricity service that sometimes does not operate. And many rural settlements are cut off from electricity producing centers. But, industry experts say off-grid solar power is becoming available to many communities.

Off-grid solar energy is energy that is captured from the sun without being connected to a nation's main electricity centers.

The United States government is investing millions of dollars in solar technology through its Power Africa project.

The International Energy Agency says more than 600 million people in Africa have no way to get electricity.

New technology, however, could help solve this problem. The price of off-grid solar energy systems has decreased sharply. Today, people can rent solar equipment for less than 50 cents a day. And they can pay for the electricity as they need it.

"He puts the system on the roof, he puts the indoor unit in the home. There is a cable to connect between them. It's a plug on both sides, you don't need to be an electrician or anything like this. And then you need to charge this by credit. So the sun charges the electricity, but you need to provide the credit to power the system up, and you do this using your mobile phone."

As the off-grid solar energy industry expands, several African countries have also invested millions of dollars in large solar plants. These power centers are on-grid, meaning they are connected to the country's electrical wires and power stations.

Senegal opened one of Africa's largest solar plants in October. It is able to produce 20 megawatts of electricity. That is enough for 160,000 people.

Chief executive Charlotte Aubi-Kalaidjian heads Greenwish Partners. The company paid for the construction of the solar plant in Senegal. 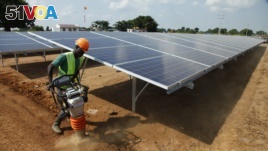 A Ugandan worker builds a solar plant in Soroti about 300 kilometers east of Uganda capital Kampala. In this electricity-starved rural part of Uganda, men ride bicycles several kilometers to the nearest market town simply to charge their phones.

Aubi-Kalaidjian says a solar farm in Senegal can produce twice the amount of electricity that a farm of the same size in Britain or in northern France could produce.

The International Energy Agency predicts that almost a billion people in sub-Saharan Africa will have on-grid electricity by 2040.

But, the agency says, 500 million people will still be off-grid. Investors believe solar power could serve those people while also helping to reduce gases linked to climate change.

Henry Ridgwell reported this story for VOA News in London. Alice Bryant adapted it for Learning English. Mario Ritter was the editor.

rent - v. to pay to use something that is owned by someone else

cable - n. a wire that carries electricity to a machine

plug - n. a part at the end of an electric plug that goes into an electricity source

mobile - adj. able to moved anywhere, not fixed in one place

megawatts - n. a measure of electricity equal to one million watts

climate change - n. a change in global climate patterns caused by an increase in gases that trap heat, such as carbon dioxide, which comes from burning coal and natural gas