A Swiss airplane powered only by energy from the sun left from Abu Dhabi early on March 9. Its creators hope the plane will make the first around-the-world journey without any fuel.

The plane is called Solar Impulse 2. It has one seat and is made from carbon fiber. The plane weighs only as much as a car but its wings are wider than a Boeing 747. The plane's wings stretch 72 meters across.

Those wings include 17,000 solar units, or cells, that capture the sun's energy. The energy allows the plane to fly day and night. 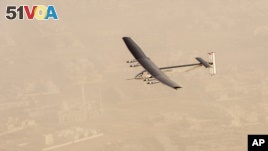 Two Swiss scientists built the plane. Bertrand Piccard is also an explorer who made the first non-stop flight around the world in a balloon. Andre [need accent! Can't figure out how to make in this program!] Borschberg is an engineer and trained fighter pilot.

The scientists say they are not trying to change the airplane industry. Instead, they want to show that new energy sources and technologies can achieve what some say is impossible.

"We want to show we can fly day and night in an aircraft without a drop of fuel,'' Mr. Piccard said.

Some parts of the trip will require the pilots to be in the tiny plane for five to six days and nights in a row. So it is good that the pilot's seat is also a toilet.

Internet viewers can go to the Solar Impulse website to see the plane's location and listen to broadcasts from the pilots.

VOA and Reuters reporters researched this story. Kelly Jean Kelly wrote it for Learning English. Hai Do was the editor.

solar – adj. of or relating to the sun

impulse – n. a strong desire to do something. Also, as a technical term, a small amount of energy that moves from one area to another.