Update Required To play the media you will need to either update your browser to a recent version or update your Flash plugin.
By Andrew Smith
18 October 2022


Babcock Ranch in southwest Florida is the first solar-powered town in the U.S. Its power comes from nearly 700,000 solar panels that supply electricity to more than 2,000 homes and other buildings, including a health center and schools.

The town is special in another way. It had almost no damage from hurricane Ian, which hit the area on September 28 with winds over 160 kilometers per hour. By comparison, the storm destroyed many parts of Fort Meyers, about 50 kilometers away.

Babcock Ranch was built on a higher elevation to be above the storm surge. The buildings were built to withstand hurricane-force winds. All power lines from the solar panels are underground, and the streets are designed to control huge amounts of water. 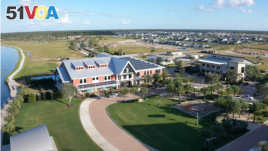 Because of these measures, Shannon Treece and her family are among the 4,600 residents who decided not to leave town before the storm hit.

"It was a little scary," she said of being in a hurricane for the first time. "We couldn't see anything since we had blocked all the windows with storm shutters, but we could hear debris hitting the house. I am glad our house held up."

Syd Kitson is the founder of the planned community. He wanted to build an environmentally friendly energy-saving city. His dream became a reality in 2018.

When building the town, "we spent a lot of time making sure Babcock Ranch was storm ready," Kitson said.

"I believe deeply in respecting the environment and wanted to prove that you could build this new city and work hand-in-hand with the environment," said Kitson. He is the chief of the property company Kitson & Partners. "Our water management system is based around natural floodways. We also have 7,000 hectares we are preserving."

The plan for the town is to grow into a much larger city. The developers want to build thousands of additional homes, which would increase the population to 50,000 residents.

"I hope we are setting a good example for others to follow as we continue to protect the natural environment at the same time," Kitson said.

solar panel –n. a flat piece of equipment that uses the sun's light to create electricity

withstand –v. to not be harmed by or not affected by something

shutters –n. (pl.) two covers for windows that close like a door

habitat –n. a kind of place where plants and animals naturally grow and live