Update Required To play the media you will need to either update your browser to a recent version or update your Flash plugin.
By Anne Ball
10 June, 2019


Dragonfish live deep down in the dark ocean, and are frightening-looking creatures.

Their sharp, transparent teeth help them survive in the hostile environment. The cause of their see-through teeth has long been a mystery. But scientists say they have an answer.

In the near-black deep water, a substance covering the teeth prevents any light from reflecting off the teeth surface. This helps a dragonfish hide their big teeth from creatures it wants to eat. 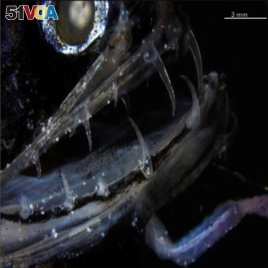 The transparent teeth of the deep-sea dragonfish are shown in this photograph released from San Diego, California, U.S., on June 5, 2019. Courtesy Audrey Velasco-Hogan/Handout via REUTERS

"The mouth is invisible and the prey is caught more easily," said scientist Marc Andre Meyers of the University of California, San Diego. He led the research, which was published this month in the journal Matter.

Dragonfish have teeth similar to humans and other animals. They are made up of an outer layer of enamel, and an inner layer of hard, dense, bony tissue called dentin. But in dragonfish, the material has been reorganized.

In the fish teeth enamel are extremely small crystals. And in the dentin, scientists found extremely small pieces of a protein called collagen. If such structures were larger, they would make light scatter. But because they are so small, light passes with ease. The teeth are also very thin.

Together, these differences prevent any light that may be in the deep water from reflecting off the tooth surface. This makes it easier for the dragonfish to hunt in the waters.

Meyers explained that, before, scientists believed dragonfish teeth were made of another, unknown material.

"However, we discovered that they are made of the same materials as our human teeth..."

And that surprised them, he said. "Same building blocks, different scales and hierarchies. Nature is amazing in its ingeniosity."

The researchers found the fish in depths of up to 1,000 meters in the Pacific Ocean, off the coast of California.

Dragonfish are small, long, and black. They grow to be about 25 centimeters long. In the deep water, dragonfish attract smaller fish to their big, open mouths with beard-like attachments that have a light on the end.

The dragonfish is not the only creature with transparent teeth. Others, like the anglerfish and hatchetfish, have them, as well. While they have not been investigated yet, Meyers said, "I suspect they have a similar structure."

Anne Ball adapted this story for VOA Learning English, with information from Reuters and Science News. Ashley Thompson was the editor.

transparent – adj. able to be seen through

reflecting – v. to move in one direction, hit a surface, and then quickly move in a different and usually opposite direction — usually + off

enamel – n. the very hard outer layer of a tooth

hierarchy – n. a system in which people or things are placed in a series of levels with different importance or status

ingeniosity – adj. very smart or clever : having or showing ingenuity

attract – v. to cause (someone) to choose to do or be involved in something

beard – n. the long hair that grows on the chin of some animals