Update Required To play the media you will need to either update your browser to a recent version or update your Flash plugin.
By Anna Matteo
16 July 2022

A couple of years ago, we wrote a story titled "Ways We Sleep." We taught expressions such as catch a few z's, get some shuteye, nod off, and turn in ... just to name a few.

There are many, many sleep expressions in English. But today we talk about ones that deal with problem solving. 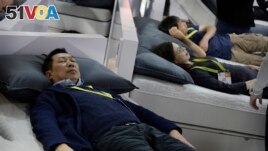 FILE - People try out smart beds during CES International, Jan. 7, 2017, in Las Vegas, Nevada. The bed adjusts the comfort and firmness depending on the user's position. It also warms the foot area before bedtime.

But "to sleep on" has another meaning.

If I have a problem and cannot think of an answer, I can "sleep on it." Often an answer comes to me the next day.

Let's say some co-workers are working on a project together, and they run into a difficult problem. No one can think of a way to solve it. One person might say, "Look, we're not getting anywhere. So, let's sleep on it. Tomorrow we can try to figure this out."

To "sleep on" something means you give yourself time to think about a problem overnight. You plan to make a decision about it later.

This does not have to mean that you are actively thinking about the problem. Your subconscious may be working on it. For example, if I am writing a story and run into a problem, I often sleep on it. I think about the problem before I go to sleep and hope that my sleeping self comes to the rescue!

Sometimes we use this expression when we just want more time to pass. We also use it when we want to look at a problem with a rested mind. We know that sleep is necessary to be healthy, both mentally and physically. Sometimes a problem doesn't look so bad the next day after a good night's sleep.

Here is another sleep expression.

Let's listen while two friends use this expression.

Mark: Hey Tish, did you hear about the new apartment building coming to our neighborhood? It's going to have 100 units!

Mark: It will mean a lot MORE people and a lot LESS parking. Aren't you upset?

Tish: Well Mark, we DO live in a city. And cities have lots of people. So, I'm not losing any sleep over it -- if that's what you're asking.

Mark: Good for you. I've lost A LOT of sleep over it.

Okay, who is upset by the new apartment building – Mark or Tish?

If you said Mark, you are right!

For our last expression, we talk about serious problems – problems in which your life might be at stake!

If you "sleep with one eye open," you are too distrustful to fall asleep. You are suspicious of others around you. You are worried or even fearful that someone or something will hurt you in your sleep.

For example, once I took a friend camping with me. She was a city girl and had never been camping. While sleeping in a tent in in the woods, she heard animal sounds and movements in the woods all night. In the morning, I asked her how she slept. She said, "I didn't sleep a wink. I slept with one eye open the whole night!"

If you run into a problem with English, try sleeping on it! Maybe the answer will come to you with the morning sun.

camping –n. the activity of sleeping outdoors in a tent or cabin usually for fun

cot –n. a thin, light bed that can be folded

couch –n. a piece of furniture that a person can sit on or lie down on

cushion –n. a soft pillow or pad to rest on

subconscious –n. the part of a person's mind that they do not consciously know about

unit –n. a single thing, person, or group forming part of a whole

at stake –n. in a position to be lost if something goes wrong

sleep a wink –v. to sleep for a very short period of time