Update Required To play the media you will need to either update your browser to a recent version or update your Flash plugin.
By Phil Dierking
15 August, 2018

Omar won the Democratic Party's primary election for the area on Tuesday.

She is seeking to become the first refugee from Africa to gain a seat in the U.S. Congress.

The 35-year-old politician spoke at the University of Minnesota's Hubert Humphrey School of Public Affairs before Tuesday's vote.

"I am a millennial with student debt," she said. "And a renter," she added, someone who is not ready, or cannot yet afford, to buy a home.

It was a simple but effective message. She was born in Somalia and wears a hijab on her head. However, Omar said that she was still like the many young, progressive and liberal voters whose support she needs to get elected.

It was the same message that helped her make history two years ago in her election to the Minnesota state House of Representatives. Her campaign says there was a 37-percent increase in the number of voters in that election.

Khalid Mohamed is a 25-year-old Somali American. He said, "Before Ilhan, I think a lot of us didn't know what type of government we had, but now that she was elected, a lot of us started paying attention."

He added, "She represented us at the state level and we saw how productive she was."

Mohamed is just one of tens of thousands of Somali Americans who voted for Omar in Tuesday's primary election. 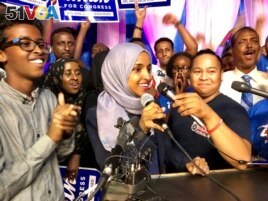 Omar hopes to follow Keith Ellison's path. Ellison is the first Muslim American elected to Congress. He currently represents the same Minneapolis Congressional District that Omar is competing in. But, Ellison is leaving Congress to run for the Minnesota Attorney General's office.

Larry Jacobs is a University of Minnesota Professor. He said, "Around America it might seem odd that one of the whitest states in the country would be sending its second Muslim to Congress...But not so in Minnesota."

Minnesota is home to the largest number of Somali refugees in the United States.

Jacobs said their votes are only part of Ilhan's success. He said the Somalia community is not a large voting group. It even split its votes between Omar and another Somali candidate. What Omar has been able to do, Jacob's said, has been to build a coalition that includes politically liberal voters and people who believe the Democratic Party needs to become more diverse.

Omar is the Democrat's Assistant Minority leader in the Minnesota House of Representatives. She has opposed the separation of families by officials at the U.S. border. She also has criticized the so-called "Muslim Ban" of the administration of President Donald Trump.

Speaking at her primary election victory party, Omar said, "In my last race I talked about what that win would mean for that eight-year-old girl in that refugee camp."

Like Omar, many people in Minnesota's Somali Muslim American community are refugees. They hope Omar's election represents a chance to change public opinion about their religion and situation.

Mohamed believes that Omar's election sends a message of hope to not just to a religious community, but to all of Africa.

"It sends a message to everyone from Africa... that you might be a refugee...but you have rights, and you can be whoever you want as long as you put the work in," he said.

Observers say Omar has a good chance of winning in the general election in November.

This story was originally reported by Kane Farabaugh for VOANews Phil Dierking adapted this story for VOA Learning English. Mario Ritter was the editor.

Are there members of any minority community that you would like to see elected to office? Write to us in the Comments Section or on 51VOA.COM.

hijab - n. a head covering worn in public by some Muslim women.

type - n. a particular kind or group of things or people

progressive - adj. using or interested in new or modern ideas especially in politics and education

diverse - adj. different from each other