Update Required To play the media you will need to either update your browser to a recent version or update your Flash plugin.
By VOA
22 June, 2012

Somalia has taken a big step along its so-called roadmap for ending a period of political transition toward a new government. On Friday, in Nairobi, Somali officials signed an agreement on a proposed constitution.

Augustine Mahiga, the United Nations special representative for Somalia, welcomed the signing of several important measures on the roadmap. 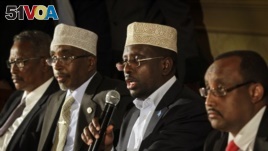 AUGUSTINE MAHIGA: "This stage in Nairobi is probably the most critical because it ushers in the accomplishment of one of the major steps to end the transition."

Six parties have signed the roadmap, including the leaders of Somalia's Transitional Federal Government and regional governments. The signers also include a representative of an influential militia.

Friday's agreement in the Kenyan capital followed more than two days of debate. Somali Prime Minister Abdiweli Mohammed Ali said the debate was mainly about the size of the future parliament and the methods for choosing future lawmakers.

ABDIWELI ALI: "It went through a difficult process, but with all the challenges that we faced, we finally delivered to the Somali people."

A National Constituent Assembly with eight hundred twenty-five members must still approve the draft constitution. After that, the constitution will be considered provisional until Somalis hold a national vote to make it permanent. But the Somali government and international officials have said the security situation remains too dangerous to hold such a referendum.

The assembly will meet in Mogadishu next month. The officials gathered in Nairobi decided to delay the assembly meeting by two weeks. That delay will leave only one month to elect a parliament and a new president by August twentieth. That is the deadline agreed to by the signers of the roadmap for ending an eight-year-long transition.

Somalia has not had a strong central government since the fall of President Mohamed Siad Barre in nineteen ninety-one. The Transitional Federal Government was established in two thousand four but has little real power.

Somalia is one of the most dangerous countries in the world. Three military offensives are underway against al-Shabab militants in central and southern Somalia.

VOA recently did a survey of Somalis to get their opinions about their proposed constitution. The survey offers a rare look at the political views in a country torn by war and drought. More than three thousand men and women answered the survey.

Eighty-three percent of those in the survey said they want a constitution with a strong central government. Eighty-seven percent said the constitution should be based in Sharia, or Islamic law. Sixty-eight percent agreed that women should be allowed to hold political positions.

Senior editor Harun Maruf in VOA's Somali Service says the service teamed with Google to do the survey.

HARUN MARUF: "There was never political survey with this depth and effort in Somalia. This would be the first one."

The service collected more than twenty thousand phone numbers for the survey. Harun Maruf says the militant-controlled areas proved the most difficult, as expected.

HARUN MARUF: "You would call somebody who lives in a territory controlled by al-Shabab, and al-Shabab will know. They issued a statement saying that anybody who participates in the constitution process would be put to death."