Update Required To play the media you will need to either update your browser to a recent version or update your Flash plugin.
By Christopher Jones-Cruise
25 October, 2016


The United Nations is supporting a program aimed at giving former militants in Somalia a chance at a fresh start.

Its goal is to help them return to Somali society.

Hundreds of fighters have left the al-Shabab militant group since 2013. The group is allied with al-Qaida.

About 160 former fighters are taking part in the U.N.-supported rehabilitation program in the Somali town of Baidoa.

In a guarded area, they learn to read and write. And they learn life skills and take religion classes.

The men cut ties with the militant group. They could have been sent to jail, but were instead chosen for the program. 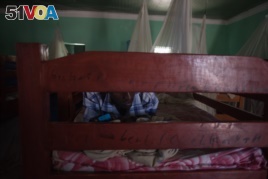 A former Al Shabab member texts on his phone while lying on his bed in a dormitory at a rehabilitation center for former militants in Baidoa, Somalia, Sept. 17, 2016. (Photo: J. Patinkin/VOA)

One of the young men spoke with VOA. He said he joined al-Shabab after Ethiopian troops fighting the group in Somalia killed his father.

The young man left al-Shabab six years later. He did not like their attacks on civilians or the fighting among the group's members.

He asked VOA not to use his name. He said he continues to receive threatening telephone calls from al-Shabab members.

"I have lost six years. The people who I was with in high school, they are in university, they are in the town, and if you see them, they are hopeful. Before I get to 30, I hope to catch up with them." 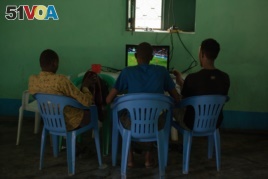 The program helps the former militants develop plans to operate a business so they can earn money. But as they plan for their future, they know their past is always present.

"Absolutely, I cannot go to where al-Shabab are, and if I go into the town, the community might not feel safe, so the best thing is just to stay here at the center, and just to accept the situation until time goes by and the community becomes more enlightened about who we are."

The rehabilitation process takes time. Some of the former fighters continue to have extremist beliefs.

VOA spoke to a man who serves as a teacher for the program. He also asked VOA not to use his name. He said some of his students have a hard time understanding other people's ideas about Islam.

The center says no one who completed the rehabilitation program has ever returned to al-Shabab.

But not everyone supports the program. It is not clear why some people who left al-Shabab are able to take part in the program while others are sent to jail. And other Somalis question why the former fighters receive so much support while they receive so little.

Patrick Loots works at the U.N.'s Assistance Mission to Somalia. He designed the program.

"This has created some kind of reassurance to some groups in al-Shabab to start reaching out to the current government and say ‘Let's talk a peace deal,' and they have directly connected to this program, so this is much bigger than we think, and I believe that, even though it's a drop in the ocean, it's a drop in the ocean with the right people."

And for many former militants, the rehab center offers hope of a second chance.

Jason Patinkin reported this story for VOANews. Christopher Jones-Cruise adapted his report for Learning English. George Grow was the editor.

rehabilitation – n. the act of teaching someone to live a normal, productive life

absolutely – adj. of or relating to something done in a complete and total way; not limited in any way

enlightened – adj. having or showing a good understanding of how people should be treated

Haidth – n. a report describing the words or actions of Islam's Prophet Muhammad

constructive – adj. helping to improve or develop something

reassurance – n. something that is said or done to make others feel less concerned

a drop in the ocean – expression. an amount so small that it has little effect