Al-Shabab Attacks Military Base in Somalia

Update Required To play the media you will need to either update your browser to a recent version or update your Flash plugin.
By Jim Dresbach
09 June, 2016


The militant group al-Shabab attacked a military base in central Somalia early Thursday.

Somali government forces and Ethiopian troops turned back the militants after an attack near Halgan village, according to Somali officials and residents.

The African Union force in Somalia said soldiers killed more than 100 al-Shabab militants who attacked the base. 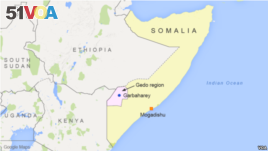 The base is about 260 kilometers north of Mogadishu.

Residents said a suicide car bomb first exploded outside the main entrance of an Ethiopian base in the village. That was followed by attacks from militants who were heavily armed.

The village chairman, Guhad Abdi Warsame, said the militants made two attacks. The main attack was against the Ethiopian base housing section of the African Union's AMISOM force. The second attack centered on a Somali government base.

Warsame said troops in both bases fought and forced the militants to retreat. He said militants attempted another attack, but it was also halted.

Residents said at least five civilians were killed during the battle.

During the past year, al-Shabab has attacked and overtaken three main AMISOM military bases. In the attacks, the group has killed 176 soldiers and civilians from Burundi, Uganda and Kenya.

The AU force has been stationed in Somalia since 2007 to fight al-Shabab.

The militant group, which has pledged allegiance to al-Qaida, wants to overthrow the Somali government and turn Somalia into a strict Islamist state.

This story appeared on VOANews. Jim Dresbach adapted it for Learning English. Kathleen Struck was the editor.

retreat – v. to move back to get away from danger or attack