Update Required To play the media you will need to either update your browser to a recent version or update your Flash plugin.
By Mario Ritter
07 December, 2014

Today we tell you more about the effects of falling oil prices. Lower demand for oil and too much supply have sent prices to their lowest levels in five years.

Last week, the Organization of Petroleum Exporting Countries decided to keep production at current levels. Representatives of the 12-nation group met in Vienna, Austria. They were unable to reach agreement on changing OPEC's production targets. 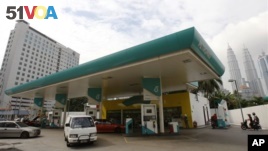 Lower oil prices are causing economic hardship in some OPEC members. Officials in some countries are exploring ways to cut government spending.

The president of Venezuela announced last week that he and other government officials should take pay cuts as part of budget reductions. The Reuters news service says the reductions are meant to answer the lower oil prices. It says Venezuela gets 96 percent of its export earnings from oil sales. The nation has among the highest inflation rates in Latin America.

Russia is a major oil exporter, but does not belong to OPEC. This week, Russia's economic development ministry predicted that the Russian economy will shrink by eight-tenths of a percent in 2015. Oil exports are important to Russia. The value of Russian money has lost about 40 percent of its value this year compared to the American dollar. Observers have blamed the drop on falling profits from oil exports, and Western sanctions to punish Russian actions in Ukraine.

But economists say the fall in oil prices is helping economies in Asia. Andrew Colquhoun is with Hong Kong-based Fitch Ratings.

"Most Asia-Pacific economies are oil importers and therefore the decline in oil prices is equivalent to a kind of income gain for them and the impact depends on whether they save or spend the income gain."

Thailand, Malaysia and Indonesia all are moving to reduce oil price supports, or subsidies, which are often a major part of government spending.

But some experts say it is a matter of time before prices recover. Jack Gerard is president of the American Petroleum Institute. He says demand for oil will rise, and prices will find an equilibrium.

This story came from VOA reports and includes material from Reuters. Mario Ritter wrote it for VOA Learning English. George Grow was the editor.

Targets - n. a goal or object that is aimed at

Influence - v. to have an effect on someone or something; to cause change

Sustained - adj. continued, being able to hold in place or carry forward

Equilibrium - n. a state in which opposing forces or actions are balanced so that one is not stronger or greater than the other