Some Birds as Smart as Apes

Update Required To play the media you will need to either update your browser to a recent version or update your Flash plugin.
By Anna Matteo
30 April, 2016


Using the term "bird brain" is one way to insult another person's intelligence. That is because a bird's brain is small. So, anyone with such a bird-sized brain was thought to be not that intelligent.

But calling someone a bird brain might not be as insulting as it once was.

That finding comes from a study of the mental abilities of birds. 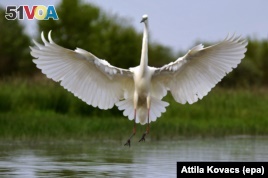 Two European scientists reported that at least two kinds of birds -- crows and parrots -- can think logically. A crow or parrot can recognize itself when the bird sees its image in a mirror.

The scientists say crows and parrots also can feel empathy. In other words, they are able to understand and share the experiences and emotions of other birds.

According to researchers, these abilities are "as sophisticated and diverse as those of apes."

However, the brains of birds and those of apes are different. The brain of a bird does not have a neocortex. The neocortex controls thinking and remembering -- one's cognitive skills. A bird brain is also much smaller than the brain of a monkey or other ape.

So how can birds perform as well as mammals in some activities?

Researchers in Germany suggest that different methods of complex thinking developed independently in birds and mammals.

The researchers found that the brains of birds and mammals do have different structures. But there are also similarities in the brain architecture.

The brains of both creatures have what is called a pre-frontal structure that controls similar high-level functions. The researchers propose a separate path of development for the similarities. The reason: both species faced the same challenges for survival.

The researchers noted that neither a multilayered cortex nor a big brain is required for complex mental skills. They reported their findings in the journal Trends in Cognitive Sciences.

VOA's Faith Lapidus reported on this story. Anna Matteo adapted her story for Learning English. George Grow was the editor.

logically – adv. of or relating to the formal processes used in thinking and reasoning

empathy – n. the feeling that you understand and share another person's experiences and emotions : the ability to share someone else's feelings

cognitive – adj. of, relating to, or involving conscious mental activities (such as thinking, understanding, learning, and remembering)

architecture – n. formation or construction resulting from or as if from a conscious act

multilayered – adj. having or involving three or more layers or levels