Update Required To play the media you will need to either update your browser to a recent version or update your Flash plugin.
By Bruce Alpert
26 March, 2016


When Cuban President Raúl Castro was asked his view of the U.S. presidential election, he did what foreign leaders usually do.

He did not answer the question.

Castro responded, "I cannot vote in the United States" at a news conference Tuesday with President Barack Obama in Havana. 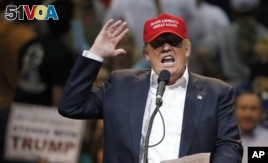 Republican presidential candidate Donald Trump speaks during a campaign rally in Tucson, Ariz on March 19. He is drawing fire from some foreign government leaders. That is unusual because foreign leaders rarely take sides in a U.S. presidential race. (AP Photo/Ross D. Franklin)

But other foreign leaders are breaking with tradition of not taking sides in other countries' elections.

Most of those who are speaking out are criticizing the leading Republican presidential candidate, businessman Donald Trump.

Trump has called for Mexico to pay for a new wall between the two nations. He also said Mexico is "sending people that have lots of problems... they're bringing drugs, they're bringing crime. They're rapists. And some, I assume, are good people."

Pena Nieto responded in an interview with Mexico's Excelsior newspaper. "That's the way Mussolini arrived and the way Hitler arrived," he said.

In England, Parliament debated a resolution to ban Trump from entering the country. The debate came after Trump called for a temporary ban on all Muslims entering the United States.

Parliament ended up not voting on the Trump resolution. But British leaders still criticized him.

After the March 22 terrorist attacks on Brussels, Trump tweeted a link to remarks he made in January, calling the Belgium city a "hell hole."

"Time & time again I have been right about terrorism. It's time to get tough," he tweeted.

When the New York Times reached Brussels Mayor Yvan Mayeur for a response, his office wrote, "We don't react to Mr. Trump's comments. Have a nice day."

The day before the terrorist attacks, Trump said he favors reducing the U.S. involvement with NATO. NATO is a 28-nation coalition that works for the security of its member nations.

Trump has argued throughout his campaign that other nations besides the U.S. should be paying more to defend Europe and Asia.

Ana Palacio is a former Spanish foreign minister. She expressed concerns about Trump's views in a recent interview with Politico.

"The opportunism, unreliability and amorality that we have seen during the [Trump] campaign would be damaging for the world in general and hurt Europe in particular," she said.

James Thurber heads the Center for Congressional and Presidential Studies at American University in Washington D.C. He said it is "highly unusual" for foreign leaders to criticize a candidate for the presidency, even before he has won his party's nomination.

Thurber just returned from Turkey, where many already have negative views of the United States

"But they are appalled at what Donald Trump is saying about Muslims," he said.

Trump is getting some support from abroad, particularly in Russia. He called Russia's President Vladimir Putin a strong leader and said he "would probably get along with him [Putin] very well."

Putin, in return, praised Trump as "a bright and talented person."

Victoria Zhuravleva is a Moscow-based expert on U.S.- Russian relations. She said the U.S. has criticized Russia and Putin over the last two years.

"So, when you hear something that is not so critical and even friendlier towards your country it's like, ‘Thank God. There's one person we can talk to, Donald Trump.'" She told Reuters.

Trump is also getting praise from some anti-immigration leaders in Europe. They agree with Trump that immigration from the Middle East should stop.

Jean-Marie Le Pen is the former head of the French National Front Party, which wants to limit immigration.

He tweeted, "If I were American, I would vote Donald Trump,"

respond – v. to say or write something as an answer to a question, a request or criticism

remarks – n. something that someone says or writes to express an opinion or idea

survey –n. an activity in which many people are asked a question or a series of questions in order to gather information about what most people do or think about something

opportunism – n. someone who tries to get an advantage or something valuable from a situation without thinking about what is fair or right

unreliability – n. not able to be trusted