Some Nigerians Wondering About Their Next Leader

Update Required To play the media you will need to either update your browser to a recent version or update your Flash plugin.
By Kelly Jean Kelly
12 April, 2015


Nigerians have voted a former dictator as their next president.

Muhammadu Buhari, age 72, is a retired general and former military leader. Today, he says he is a born-again democrat. But those who remember his strict military regime wonder if he is really a changed man. 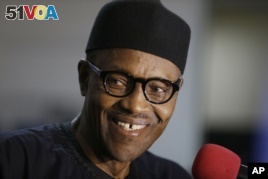 In 1983, Mr. Buhari took power in a military coup and ruled Nigeria for 20 months. He ran unsuccessfully for president three times before beating Goodluck Jonathan in the country’s March elections. His victory was the first time in Nigeria that a candidate has defeated a sitting president in an election.

Many people are calling Mr. Buhari’s victory a political turning point and a major step forward for democracy in Nigeria. But some people, such as artist Femi Kuti, are asking why the world is celebrating a former military dictator.

Femi Kuti is the son of singer and Afrobeat legend Fela Kuti. Thirty years ago, a military court under then-dictator Muhammadu Buhari sentenced Fela Kuti to five years in prison. Human rights group Amnesty International declared the singer a political detainee and campaigned for his release.

His son remembers the event well. He says his father was falsely charged.

“It was horrific. It was terroristic. It was depressing. Let’s take for instance the story of my father, who was arrested for taking £1,600 ($2,200). And he declared it, and he was charged and jailed. I witnessed the beatings, and the trauma and all what my father went through.”

Mr. Buhari has taken full responsibility for his actions during his time in power. He has apologized to political opponents. In a speech, he called himself a reformed, or changed, democrat.

Political analyst Cheta Nwanze says he does see a difference between Mr. Buhari now and then.

“Some of the language that has been coming from him this time around is not as firm as it used to be back in the day. In the previous three elections, there was this sort of air of 'it’s my way or the highway.' It’s kind of like the last four years have actually taught him that (in a) democracy you don’t achieve results by giving orders, but by compromise.”

During his time in power in the 1980s, Mr. Buhari declared what he called a “war on indiscipline.”

Political opponents and critics of his regime were jailed. He introduced plans to end corruption, fought against drug trafficking and forced citizens to form neat lines at bus stops. His laws restricting press freedom were the worst in the country’s history.

Today, journalist Alkasim Abdulkadir says Mr. Buhari is a reformed leader who is ready to work with other countries, political parties and ethnic groups.

Mr. Buhari has promised to improve the situation Nigeria. He says he will deal with corruption and inequality between rich and poor. And, he says, he will improve security in the country’s northeast. There, the Islamist militant group Boko Haram leads an increasingly violent rebellion.

Umar Dala is a retired police officer from the country’s northeast. He says the rise of the Boko Haram militant group is a symbol of the former government’s failure. Mr. Dala strongly believes Mr. Buhari is the best leader for Nigeria.

"He has the experience. He knows the problem(s) of the country more than any other person.’”

The recent election sends a strong message to Mr. Buhari, too. If he fails, the voters will remove him from office.

Reporter Katarina Hoije in Nigeria prepared this story for VOA. Kelly Jean Kelly wrote it for Learning English. George Grow was the editor.

pessimistic – adj. having a lack of hope for the future; expecting bad things to happen

compromise – v. to give up something you want in order to reach an agreement