Update Required To play the media you will need to either update your browser to a recent version or update your Flash plugin.
By George Grow
23 January, 2015


Recent comments of a man who fled North Korea are raising questions about the U.N. report on human rights abuses in the country. The man gave information to U.N. investigators. He has now admitted that parts of what he told them about his life in North Korean prison camps were untrue.

U.N. officials say even though the man's story is not completely true, it does not mean the results of the investigation should be disputed.

The man's story demonstrates the difficulty of confirming information in one of the world's most secretive countries. 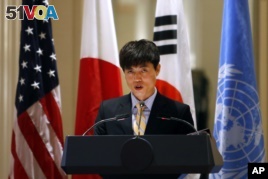 Shin Dong-hyuk was one of many people who gave evidence to the U.N. Commission of Inquiry into North Korea. His statements helped document a system of political prisons in North Korea and abuses that include murder, enslavement and torture.

But his recent admission that parts of his story are untrue has led North Korea to raise questions about the Commission's report. North Korea's state-operated news agency said "the admission of his lies goes to prove that everything told by those who claim to be ‘defectors from the North' cannot be trusted."

The Commission's chairman has said the man's misleading statements do not damage the report's believability. The chairman noted the report includes evidence from hundreds of witnesses.

Ahn Chan-il also defends the report. He fled North Korea. He is now president of the World Institute of North Korea Studies.

He says human rights violations are continuing in North Korea. He says the violations are 10 or even 100 times worse than what Shin Dong-hyuk and other defectors have reported.

Shin Dong-hyuk says the important details of his torture in North Korean camps are true. He says he was hung over a fire and did witness the execution of his mother and brother. But he admits he misled investigators about some dates and other details. He failed to say that he had escaped two times to China, where he was caught and returned to North Korea. He also falsely said he was tortured for escaping at the age of 13. He was 20 when the torture happened.

Choi Yong-sang works at the Network for Democracy and Human Rights in North Korea. He says it can be difficult at times to convince defectors to give complete and truthful reports about their experiences. Some may withhold details to protect family members in the North. Others may repress painful memories. And, he says, some may overstate their stories, especially if they are being paid to talk to the media.

He says the media often reports on defectors who tell more sensational and interesting stories. He says such stories are directly connected to money.

North Korea greatly restricts visitor travel and communication in the country. Outside groups have to depend on those who escaped to confirm reports of abuse.

Rights groups say even though Shin Dong-hyuk's story has proven not to be completely true, there is still evidence to support the U.N. Commission's decision to urge the International Criminal Court to consider the issue of human rights in North Korea.

overstate – v. to say that (something) is larger or greater than it really is

Does the fact that some of the defector's story is untrue affect your belief in the rest of his story? We'd like to hear from you. Write to us in the comments section.