Some Say It’s Time for Women as Priests, But It’s Unlikely

Update Required To play the media you will need to either update your browser to a recent version or update your Flash plugin.
By Susan Shand
24 August, 2018


The Roman Catholic Church does not allow women to become priests. With the latest sex abuse crisis, some believe it is time for a change. But, they admit, it is unlikely the church will change anytime soon.

Pope Francis and the male priests at the Vatican have said repeatedly that the teaching against female priests comes from God and cannot be changed.

"I don't see any movement to ordain women," said Margaret McGuinness, a religion professor at La Salle University in Philadelphia. "The people in power aren't going to look at this as a solution," she added. 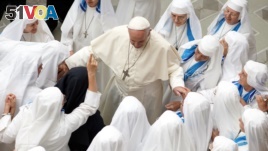 Pope Francis is greeted by a group of nuns during his weekly general audience in the Pope Paul VI hall at the Vatican, Wednesday, Aug. 22, 2018. (AP Photo/Andrew Medichini)

In the United States, an organized campaign asking for female priests dates back to the 1970s. Its leaders have used the new sex abuse cases — in which the accused are all priests – to help their argument.

In one case, former Cardinal Theodore McCarrick is accused of abusing at least two children as well as adult men studying to be priests. In another, a grand jury report from the state of Pennsylvania says that about 300 priests sexually abused about 1,000 children in six dioceses since the 1940s.

Role of female in the Catholic Church

Bridget Mary Meehan has led a movement calling for female priests that challenges the Church's teachings. She said, "If we had women as equals and partners, women ordained in the Catholic Church, the church would not be in this mess, because we would have parents who would minister and who would make sure children are protected."

Church teaching says anyone who tries to ordain a woman will be expelled from the church. The Vatican considers such an act as bad as the sexual abuse of children.

Kate McElwee, head of the Women's Ordination Conference, said Church leaders have worked hard over many years to protect abusive priests and ignored the victims.

Pope Francis, she noted, has called on all Catholics to help create a new culture in the church to stop the sexual abuse of children. McElwee said this would require "everyone at the table" and the end of the old male-only leadership.

Under Catholic rules, the priesthood is only for men because Christ chose only men as his 12 apostles. It is considered an unbreakable rule from God.

Pope Francis has repeatedly said women cannot become priests. But he has called for a greater role for women in the decision-making areas of the church.

In 2016, he created a commission to study the role of female deacons in the early years of the Catholic Church. The work of that commission was never released to the public, but some believe it may someday allow women to become deacons.

Deacons can perform many priests' duties except they are not permitted to celebrate Mass.

Kate McElwee said her organization would welcome a decision to let women be deacons because this might lead to the ordination of women as priests.

The Women's Ordination Conference and its allies also believe women priests could help the church with its biggest problem: the shortage of priests in many parts of the world.

One of the worst shortages is in the Amazon area of South America. An early report for the Vatican's 2019 meeting on the Amazon called for church leaders to find new "official ministries" for women to serve there.

Michael Higgins teaches at Sacred Heart University in the U.S. He does not think women will be ordained as priests in the near future. But, he said, that a culture of male power "doesn't work anymore."

Margaret McGuinness, the La Salle professor, said Church leaders would have to make important changes to stop Catholics from leaving.

She added, "If they don't do something, people are just going to walk away."

Susan Shand adapted this story for Learning English based on Associated Press news reports. Hai Do was the editor.

priest – n. a person who has the authority to lead or perform ceremonies in some religions and especially in some Christian religions

diocese – n. the area that is controlled by a bishop

ordain – v. the official act or process of making someone a priest

deacon – n. an official in some Christian churches whose rank is just below a priest

Mass – n. a Christian ceremony especially in the Roman Catholic Church in which people eat bread and drink wine representing the body and blood of Jesus Christ