Some Say 'There's No Smoke Without Fire'

Update Required To play the media you will need to either update your browser to a recent version or update your Flash plugin.
By Anna Matteo
09 January 2021

On this program we explore words and sayings in American English. 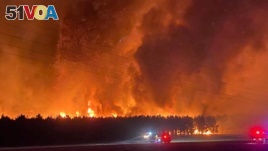 Smoke and flames from bushfire are seen in Gingin, Western Australia in this undated handout image. (Nikki Woods/Dept. of Fire and Emergency Services via REUTERS)

Today we talk about fire. Any kind of fire – from a campfire to a lit match – gives off smoke. This fact about fire relates to today's idiom: There is no smoke without fire.

Before we continue, let's talk about two words often used to explain this idiom: rumor and gossip.

Rumors and gossip are stories or pieces of information that are passed from person to person but have not been proven to be true. They are often about something bad.

One meaning of "there's no Smoke without fire" is that rumors and gossip often have some truth behind them.

If the word on the street is that something is really bad, it just might be. Or if you hear unpleasant things about someone or something from many different people, there may be some truth to it. Maybe.

I think we should start looking for another job. I've heard that this bank is going under.

It could be just gossip.

But usually, there's no smoke without fire.

In other words, there must be at least some truth to all the talk. The logic is this: If many people are saying that something bad is happening, it could be partly true.

Hey, I hear you're going out with that new guy at work.

We just went for a long walk together. That's about it.

Well, be careful. Rumor has it that he is bad news.

What kind of bad news?

Well, he's been married before.

So. It's no crime to have a failed marriage.

Right. But he's been married FOUR times. My cousin knows a former wife of his. She says he owes money all over town.

This is just gossip.

gossip – n. casual or unconstrained conversation or reports about other people, typically involving details that are not confirmed as being true.

word on the street – idiom what people are saying

going under – v. to be overwhelmed, destroyed, or defeated

logic – n. a proper or reasonable way of thinking about something : sound reasoning