Some University Students Want Schools to Return Their Money

Update Required To play the media you will need to either update your browser to a recent version or update your Flash plugin.
By Alice Bryant
05 May 2020


They wanted to experience college life, but their universities sent them home to learn from online classes during the coronavirus crisis.

Now, students across the United States are taking legal action against over 20 colleges and universities. They want the schools to return part of the money they paid for tuition, meal plans and housing costs. The students say they are not getting the quality of education they were promised.

The cases show students' growing dissatisfaction with online courses that schools hurried to create as the coronavirus forced college campuses to close. The students say they should pay lower tuition rates for the part of the term that was offered on the internet. They argue that the quality of education is far below the classroom experience.

However, college officials reject the idea that students are owed refunds. Students are learning from the same professors who teach on campus, officials say. And the students are still earning credits toward their education. Schools say that, after being forced to close by their states, they are still offering students a quality education.

Grainger Rickenbaker is a 21-year-old student from South Carolina. He filed a class-action lawsuit against Drexel University in Philadelphia. He said the online classes he has been taking are poor substitutes for classroom learning. There is little interaction with other students or professors, he said. And some classes are being taught almost entirely through pre-recorded videos, with no class discussion. 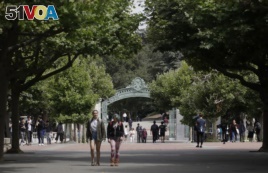 FILE - People walk in front of Sather Gate on the University of California at Berkeley campus in Berkeley, Calif., Thursday, July 18, 2019.

Other students report similar experiences. A case against the University of California, Berkeley, says some professors are only sending homework assignments, with no video teaching at all. A case against Vanderbilt University in Tennessee says class discussion has been affected and the educational quality of classes has decreased.

In Indiana, a Purdue University engineering student says the school's closing has prevented him from finishing his senior project: building an airplane. His complaint says no online class can reproduce the real-world experience he had hoped to gain from the project.

Class-action lawsuits demanding tuition refunds have been launched against at least 26 colleges, targeting private universities, such as Brown, Columbia and Cornell. Students also have brought cases against large public universities, such as Michigan State and the University of Colorado, Boulder.

Some of the suits note some schools' financial holdings. They accuse schools of unfairly keeping refunds even when the value of their endowments is often more than $1 billion.

Several colleges would not comment on the cases. But some said students have continued to get what they paid for.

Ken McConnellogue works for the University of Colorado. He said it is disappointing that people have been so quick to take legal action only weeks into the health crisis.

McConellogue told The Associated Press that professors have been working hard to provide the same high quality education as that of the classroom.

He admits that classroom and online learning are different. "We all would prefer to have students on our campuses," he said, but noted we are in the middle of a worldwide health crisis.

Emily Guerrant is a Michigan State spokeswoman. She says her university has spent more money to move classes online. She added that the school has kept its promise to provide meaningful learning experiences "at no additional cost" to students.

Officials at Drexel University said the school has continued to provide many academic offerings and support while students learn from home.

Lawyers representing students, however, say the refunds are a question of fairness.

Roy Wiley is a lawyer for the Anastopoulo Law Firm in South Carolina, which is representing students in more than 12 cases.

Willey said his office has been contacted by hundreds of students seeking legal action, and his office is looking into several possible cases. Other law offices taking on similar cases say they are also seeing a rising demand from students and parents who say they should get refunds.

Along with tuition, the cases also seek refunds for costs that students paid to use physical fitness centers, laboratories and other buildings that are now closed. The lawsuits seek refunds that could add up to several thousand dollars per student at some schools.

Lawyers are asking courts to answer a difficult question as universities move classes online: Is there a difference in value between online classes and the traditional classroom?

Supporters of online education say it can be just as effective. And universities say they have done everything they can to create high-quality online classes in just a few weeks.

But some of the suits say that the college experience is about more than course credits. They say there is a value to the personal interaction students get with professors and other students, both in and out of the classroom.

Willey adds that colleges themselves often charge lower costs for online classes, which he says is a sign of their value.

The Associated Press reported this story. Alice Bryant adapted it for VOA Learning English. George Grow was the editor.

tuition - n. the money that is paid to a school for the right to study there

campus - n. the area and buildings around a university or school

refund - n. an amount of money that is given back to someone who has returned a product or paid too much

class-action - adj. describing a lawsuit in which many people join together to sue because they all say they were harmed by the same person or group

lawsuit - n. a process by which a court of law makes a decision to end a disagreement between people or organizations

interaction - n. to talk or do things with other people

assignment - n. a task someone is required to do

endowment - n. a large amount of money that has been donated to a school, hospital, or something else, and is used to pay for its creation and operation costs